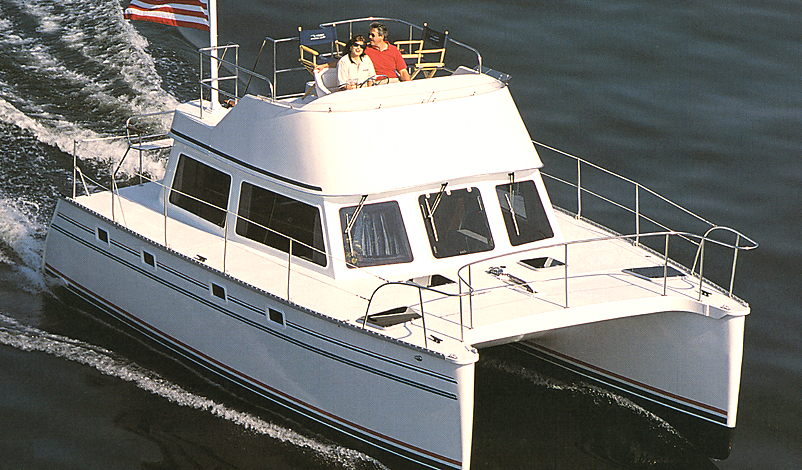 Name: 32-34 Power Catamaran
Length: 32
Hull Type: Catamaran
Gross Weight: --
Fuel Capacity: 184 gals.
Model Years: 2000—2007
Draft: 2'4"
Beam: 16'10"
Water Capacity: 80 gals.
Waste Capacity: 38 gals.
Length w/ Pulpit: --
The PDQ 34 (called the PDQ 32 until the hulls were lengthened in 2003) is a distinctive catamaran trawler whose stable ride and exceptional fuel economy made her a popular boat during her production years. Built in Canada, she’s a great choice for cruising enthusiasts looking for an alternative to traditional monohull trawlers. This is a very roomy boat—indeed, there’s more usable living space in the PDQ than one expects in a 34-footer. Her two-stateroom layout allows for a huge salon with a U-shaped lounge on the centerline (providing seating for six) and an elevated lower helm aft. The galley is down in the portside hull (the head is forward in the opposite hull), and both staterooms are aft, extending from the hulls under the aft deck. Note the appealing cherry joinery and large cabin windows. Additional features include broad, safe decks for lounging and line handling, a roomy flybridge, protected running gear, and an underwater exhaust system. With her thin hulls, the PDQ 34 cuts through waves without the pounding of a conventional hull. Twin 75hp Yanmar inboard diesels cruise at 13–14 knots and reach a top speed of just under 20 knots.

Called PDQ 32 until hulls were lengthened in 2003. Skeg protects props and rudders.