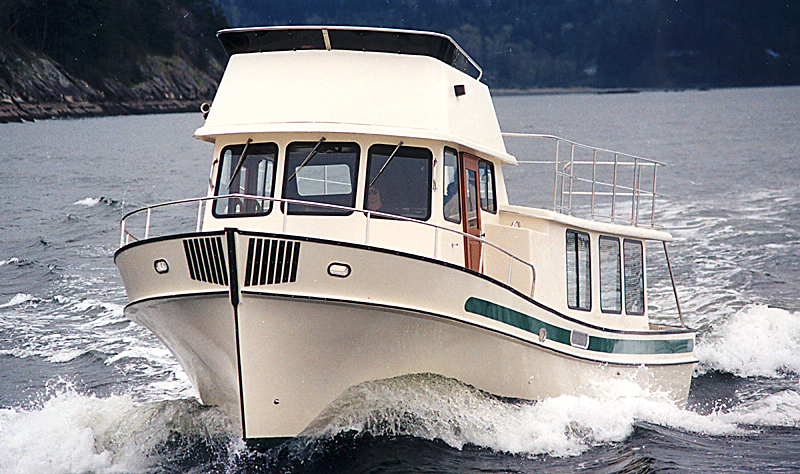 Name: 37
Length: 37
Hull Type: --
Gross Weight: --
Fuel Capacity: 400 gals.
Model Years: 1997—2004
Draft: 4'2"
Beam: 13'3"
Water Capacity: 200 gals.
Waste Capacity: 50 gals.
Length w/ Pulpit: --
The Pacific Trawler 37 is an updated version of the original PT 37 trawler sold in the U.S. back in the 1970s. First built of wood in Japan, a total of 21 fiberglass PT 37s were later produced in California until 1976 when the flood of cheap Asian-built trawlers took over the market. Later built in Washington state, the Pacific Trawler’s standard single-stateroom floorplan is designed for the cruising couple. She rides on a hard-chined semi-displacement hull with moderate beam, long prop-protecting keel and a well-flared bow. With the pilothouse set well forward on the foredeck and only a single stateroom below, the salon of the PT 37 is very large. Note that the head is forward in the salon, opposite the galley, rather than adjacent to the stateroom. Visibility from the pilothouse, two steps up from the salon, is excellent and sliding port/starboard doors provide easy deck access. Because the salon extends to the full width of the hull, there are no side decks aft of the wheelhouse. A flybridge was optional. A single 220-hp Cummins diesel will cruise at 10 knots and reach a top speed of around 14 knots. Note that the Pacific Trawler 40 is the same boat with an extended transom.