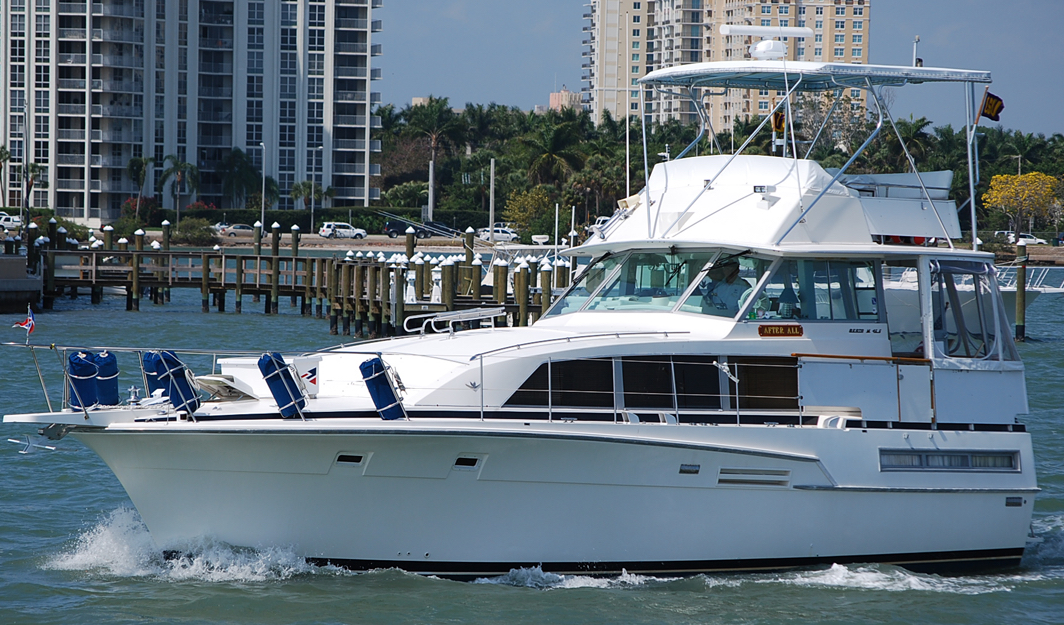 Name: 46 Motor Yacht
Length: 46'3"
Hull Type: Modified-V
Gross Weight: 41,000#
Fuel Capacity: 500 gals.
Model Years: 1981—1984
Draft: 4'4"
Beam: 15'3"
Water Capacity: 160 gals.
Waste Capacity: 60 gals.
Length w/ Pulpit: --
When the Pacemaker Yacht Co. shut down in 1980, Uniflite purchased the molds to this successful motor yacht design and reintroduced her the following year as the Uniflite 46 MY. There are many who consider this to be one of the best-looking flush-deck yachts ever produced, and her graceful lines and spacious salon have made her a popular design over the years with a great many owners. (Note that Chris Craft went on to build this model when Uniflite went under in 1984.) Uniflite retained the original Pacemaker interior design—a somewhat unusual layout with a stateroom/den aft of the salon and the forward head located in the bow section. The result is a spacious 14-foot salon with easy access to the mid-level galley. A significant change in the Uniflite is her fully enclosed aft deck (replacing Pacemaker’s partial enclosure), which becomes an air-conditioned and teak-paneled second salon. Additional features include a large flybridge (by flush-deck standards), wide side decks, and good engine access. Note that with no aft deck, line-handling chores are handled from the swim platform. Standard 410hp 6-71 Detroit Diesels cruise the Uniflite 46 at 16–17 knots and reach a top speed of about 20 knots.