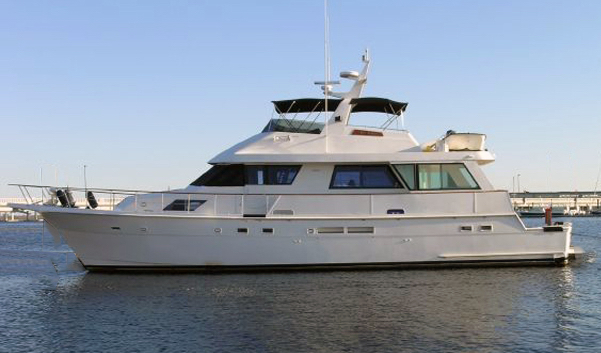 Name: 67 Cockpit Motor Yacht
Length: 67'8"
Hull Type: Modified-V
Gross Weight: --
Fuel Capacity: 1,170 gals.
Model Years: 1988—1991
Draft: 5'1"
Beam: 18'2"
Water Capacity: 372 gals.
Waste Capacity: 210 gals.
Length w/ Pulpit: --
A popular model for many years after the last hull was delivered in 1991, the Hatteras 67 Cockpit MY is a cockpit version of the Hatteras 60 Motor Yacht. Originally, the interiors of both models featured the same galley-down layout with three staterooms (including a full-beam master aft with whirlpool tub) and split engine rooms—a Hatteras trademark during the 1980s. In 1990 Hatteras engineers completely redesigned the interior (in a big way, actually) by locating the galley on the main deck level, adding a fourth stateroom/crew quarters below, and replacing the separate engine rooms with a full-beam engine room. Until the redesign, the Hatteras 67 had a spacious aft deck platform with wing doors and room for a small crowd. When the galley was moved up, however, the aft salon bulkhead was extended further aft, substantially reducing the aft deck dimensions. The cockpit, accessed by a ladder from the aft deck, includes lazarette storage and a transom door. Unlike many Hatteras motoryachts of this era, the 67 Cockpit MY has full walkaround side decks. Detroit 870hp diesels cruise at 16–18 knots (nearly 20 knots top). Optional 1,040 diesels top out in the mid 20s.

Stretched version of Hatteras 60 MY (1988–90) with large 8-foot cockpit took traditional motoryacht luxury, comfort to the next level.