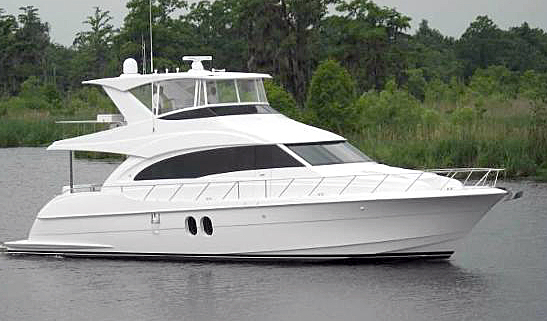 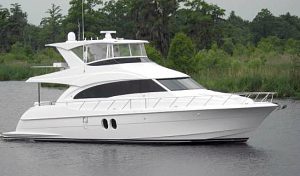 Name: 60 Motor Yacht
Length: 60'9"
Hull Type: Modified-V
Gross Weight: --
Fuel Capacity: 1,033 gals.
Model Years: 1988—1990
Draft: 5'0"
Beam: 18'2"
Water Capacity: 335 gals.
Waste Capacity: 210 gals.
Length w/ Pulpit: --
The Hatteras 60 Motor Yacht is a restyled version of the Hatteras 58 Motor Yacht, the model she replaced in the Hatteras fleet in 1988. In her day, the Hatteras 60 was a real head-turner with flowing lines and a towering double-deck profile. The galley-down interior is roughly the same as her predecessor with the salon open to the lower helm on the deckhouse level and three staterooms and three heads below. The mid-level galley is down several steps from the helm/salon area and features large counter spaces for food preparation, abundant storage lockers, and booth style dinette for four. Forward is a guest or crew cabin with over/under bunks and private head with shower. To port, forward of the engine rooms, is the guest stateroom with twin berths and common head with separate stall shower. Aft is the full-beam master stateroom with walkaround queen berth and private head with tub and shower. Unlike the 58 Motor Yacht with its aft-deck bridge ladder, access to the flybridge in the Hatteras 60 is inside, just aft of the lower helm. Detroit 720hp 8V92 engines cruise at 17–18 knots. The Hatteras 67 Cockpit Motor Yacht is the same boat with a cockpit and larger 12V71 engines.

Updated version of earlier Hatteras 58 MY (1985–87) with improved styling, inside bridge access made a good yacht even better.

Name: 60 Motor Yacht
Length: 60'11"
Hull Type: Modified-V
Gross Weight: --
Fuel Capacity: 1,175 gals.
Model Years: 2009—2015
Draft: 4'6"
Beam: 18'2"
Water Capacity: 250 gals.
Waste Capacity: 100 gals.
Length w/ Pulpit: --
The Hatteras 60 Motor Yacht was the company’s “entry level” motoryacht when she was introduced in 2009. Designed to be owner operated, she’s a big 60-footer with a super-size interior compared with European yachts her size. The original floorplan had a circular dinette forward of the island galley and bridge steps to port. In 2010, however, the bridge staircase was eliminated in favor of an expanded country kitchen galley and L-shaped dinette with seating for six. The heart of the Hatteras 60 is her elegant salon with its stainless steel framed entry doors, sectional seating, and built-in entertainment center. There are three staterooms and two heads on the lower level including an enormous full-beam master with walkaround king bed, dressers and night stands, hullside ports, and ensuite head with tub and shower. The forward VIP stateroom features a queen bed, and the port guest room has twin beds. The covered aft deck features a large settee with table and port stairwell leading down to the swim platform. Heavily built on a resin-infused hull with cored hullsides, big eight-blade propellers are tucked into deep tunnels at the stern. Cat C-18 V-drive diesels cruise at 20–22 knots.