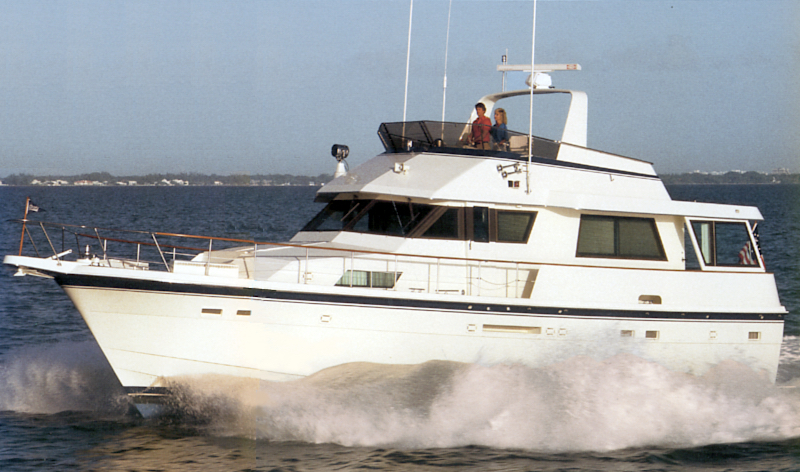 Name: 54 Motor Yacht
Length: 54'9"
Hull Type: Modified-V
Gross Weight: --
Fuel Capacity: 800 gals.
Model Years: 1986—1988
Draft: 4'2"
Beam: 17'6"
Water Capacity: 250 gals.
Waste Capacity: 180 gals.
Length w/ Pulpit: --
Replacing the iconic (but rapidly aging) Hatteras 53 Motor Yacht, the Hatteras 54 Motor Yacht was the first of the “new look” Hatteras designs when she was introduced in 1985. She never came close to the popularity of her predecessor, however, perhaps because galley-down layouts were going out of fashion in the late 1980s and widebody salons were in growing demand. The 54’s standard three-stateroom floorplan is arranged with the lower helm open to the salon for an uninterrupted wheelhouse view from bow to stern. The mid-level galley is down several steps from the helm/salon area and features large counter spaces for food preparation, abundant storage, and a booth-style dinette for four. Forward is a guest cabin with over/under bunks, washer/dryer, and head with stall shower. To starboard, aft of the engine rooms, is the guest stateroom with twin berths. A head with stall shower is opposite, to port. Aft is the full-beam master stateroom with walkaround queen berth, dressing table, and private head with tub and shower. The semi-enclosed aft deck is fitted with wing doors and extended windshields for weather protection. Detroit 650hp 8V92TI diesels cruise at 16–17 knots.

Inside flybridge access is a plus. Fit and finish is as good as it gets in a production yacht.