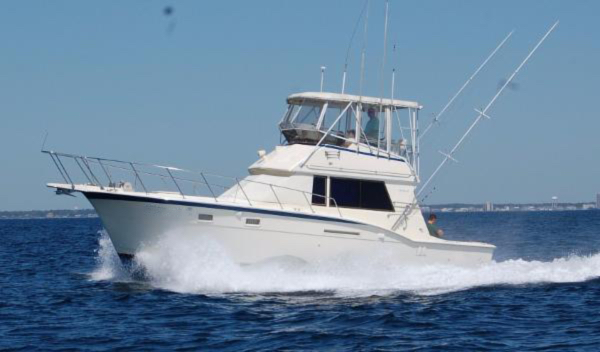 Name: 37 Convertible
Length: 37'0"
Hull Type: Modified-V
Gross Weight: --
Fuel Capacity: 330 gals.
Model Years: 1977—1982
Draft: 3'3"
Beam: 14'0"
Water Capacity: 135 gals.
Waste Capacity: 60 gals.
Length w/ Pulpit: --
Introduced as a replacement for the popular Hatteras 36 (1969–77), the 37 Convertible never achieved the widespread popularity of her predecessor in spite of her improved profile and roomier accommodations. She’s built on a solid fiberglass hull with twin chines, a long keel, and moderate deadrise at the transom. The 37’s galley-up, two-stateroom interior is paneled in teak, and a double berth became available in the forward stateroom beginning with the 1982 models. A stall shower is located in the double-entry head compartment. Large wraparound cabin windows give the salon a surprisingly spacious feeling for a 37-foot boat, and her tournament-style flybridge offers seating for five. Additional features include a molded bow pulpit, transom door, and relatively wide side decks. A lower helm was optional. At 29,000 pounds, the Hatteras 37 is no lightweight, and with only 330 gallons of fuel, she’s not a long-range boat. GM 310hp 6-71N diesels cruise at 17–18 knots with a top speed of about 21 knots, and optional 390hp 6-71TI diesels cruise at 18–20 knots and reach a top speed in the neighborhood of 23 knots.