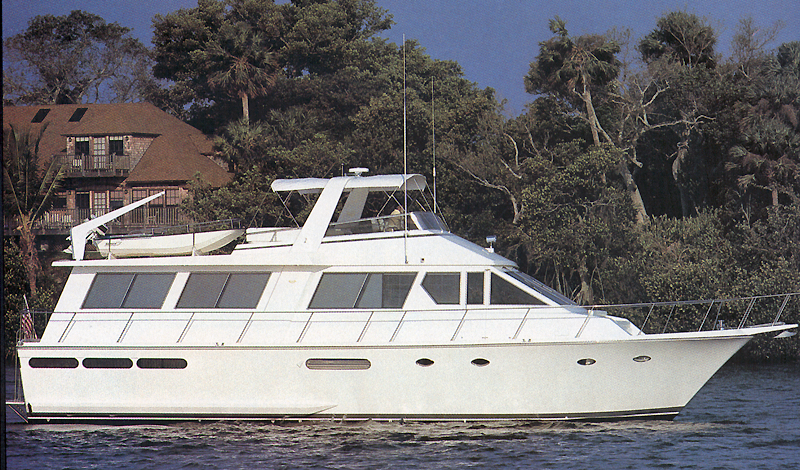 Name: 63 Motor Yacht
Length: 63
Hull Type: Modified-V
Gross Weight: --
Fuel Capacity: 1,080 gals.
Model Years: 1987—1988
Draft: 4'9"
Beam: 17'4"
Water Capacity: 350 gals.
Waste Capacity: --
Length w/ Pulpit: --
The Gulfstar 63 Motor Yacht is a stretched version of the company’s smaller Gulfstar 55 Motor Yacht, also introduced in 1987. The extra length of the 63 can be seen in her vast salon dimensions as well as a greatly expanded master stateroom with its ensuite his-and-hers head (with full-size tub) and sitting area. Built on a fully cored, modified-V hull with a wide beam, the construction of the 63 was considered state of the art in the late 1980s. Her lavish four-stateroom interior includes three full heads on the lower level and a formal dining area above, aft of the galley and separated from the salon by a glass partition. Stairwells in the salon lead down to the master stateroom as well as up to the flybridge, and a small aft deck at the stern is suitable for line handling. Visibility from the enclosed pilothouse is excellent. Additional features include handcrafted teak interior woodwork, a huge flybridge, full walkaround decks, and a laundry center. A good performer, she’ll cruise at 19–20 knots (low 20s top) with 735hp GM diesels. When Viking purchased Gulfstar in late 1987 the 63 continued in production as the Viking 63 Motor Yacht.