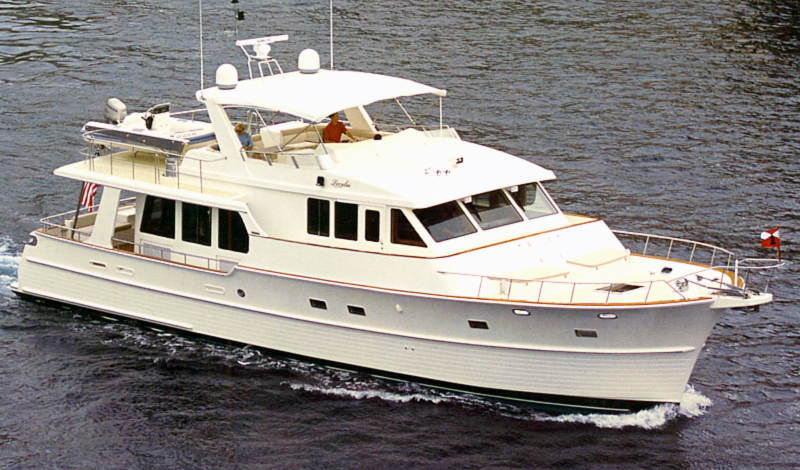 Name: 64 Aleutian RP
Length: 64
Hull Type: Modified-V
Gross Weight: --
Fuel Capacity: 2,200 gals.
Model Years: 2002—2007
Draft: 5'6"
Beam: 19'10"
Water Capacity: 440 gals.
Waste Capacity: 150 gals.
Length w/ Pulpit: --
The Grand Banks 64 Aleutian is a notable departure from the time-honored series of trawlers long associated with the Grand Banks name. Aside from the fact that she’s the largest Grand Banks ever, the Aleutian is faster and far more stylish than any of her predecessors. Built on an efficient semi-displacement hull with a deep keel, cored hullsides, and prop pockets, the Aleutian’s handsome raised pilothouse profile is accented by a stepped sheer and a distinctive Portuguese bridge. The standard three-stateroom, three-head floorplan is designed so that the second guest cabin can be used as an office. The galley is on the pilothouse level, several steps up from the salon with its luxurious teak furnishings and Corian counters. The engine room can be accessed from either the master stateroom or the cockpit lazarette. (Note that the lazarette can house optional crew quarters.) Additional features include a huge flybridge, wide, secure side decks, tremendous fuel capacity, and watertight engine room bulkheads and doors. Cat 1,550hp C-30 diesels cruise the 64 Aleutian at 20 knots. Note that the 70 Aleutian, introduced in 2005, is the same boat with a cockpit extension.

Modified-V hull with prop pockets will cruise at 18 knots with 800hp Cat diesels.