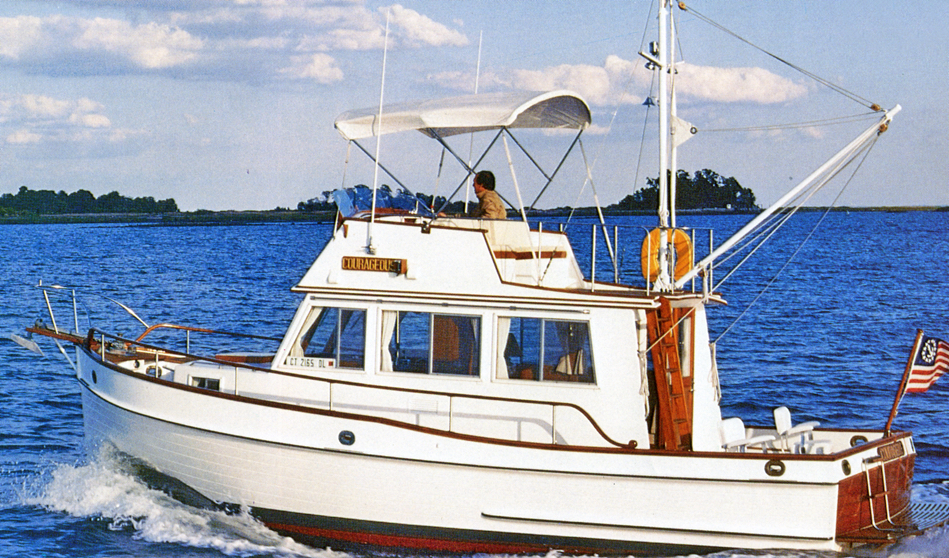 Name: 32 Sedan
Length: 32'0"
Hull Type: Modified-V
Gross Weight: 12,000#
Fuel Capacity: 120/220 gals.
Model Years: 1973—1991
Draft: 2'6"
Beam: 13'0"
Water Capacity: 40 gals.
Waste Capacity: 30 gals.
Length w/ Pulpit: --
There were more Trojan 32s built (over 2,700 in all) than any other production fiberglass boat over 30 feet in the business. Her appeal was a straightforward combination of an affordable price, contemporary design, and roomy cabin accommodations. Several versions of the Trojan 32 were offered over the years including Hardtop and Express models, a Flybridge Express (with an open lower helm), and the very popular Flybridge Sedan pictured above. All were built on a low-deadrise modified-V hull with a relatively wide beam and solid fiberglass construction. Surprisingly, the basic interior and exterior design of the Sedan remained largely unchanged during her long production run. A lower helm was standard, and wraparound cabin windows give the interior a bright and wide-open appearance. A stable and good-running boat, cruising speed with 250hp Chrysler engines is approximately 18–19 knots and the top speed is around 25 knots. Add 1–2 knots for more recent models equipped with the 270hp Crusaders. Note that the decks of early models were made of teak, and the once-optional 220-gallon fuel capacity became standard in 1984.