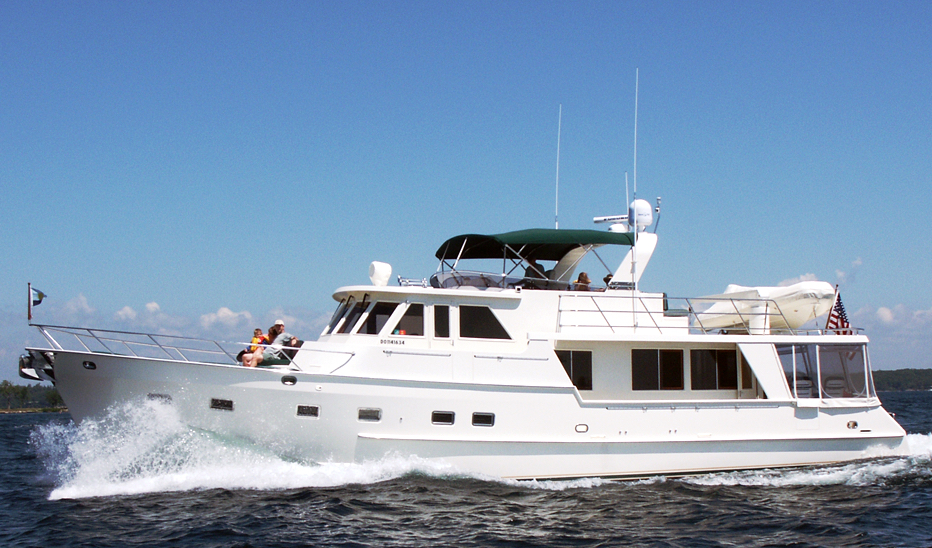 Name: 60-64 Raised Pilothouse
Length: 64'0"
Hull Type: Semi-Disp.
Gross Weight: --
Fuel Capacity: --
Model Years: 1999—2006
Draft: 4'9"
Beam: 17'2"
Water Capacity: 350 gals.
Waste Capacity: 100 gals.
Length w/ Pulpit: --
Among the top-selling long range cruisers of her era, the Grand Alaskan 64 bears a strong resemblance to the old DeFever Alaskan series built during the late 1960s and 1970s. Where the original Alaskans were built of wood on a full displacement, round-chined hull, the Grand Alaskan rides on a semi-displacement hull with hard chines and a long prop-protecting keel. Built in Taiwan, the Grand Alaskan is a semicustom flush deck yacht with a cockpit. Her traditional lines are accented by a raised pilothouse, protective Portuguese bridge and wide covered side decks. A single level living area extending nearly 25 feet in length is formed by the salon, galley and aft cockpit. The standard three-stateroom interior has the galley forward of the salon and a huge master stateroom with private salon entrance. The day head opposite the galley is a practical touch and the pilothouse—four steps up from the salon—features a forward facing settee, center helm, and steps to the flybridge. (A four-stateroom layout was optional.) Cat 3196 660hp diesels deliver a cruising speed of 9–10 knots (about 16 knots top). Over 30 of these yachts were built. The Grand Alaskan 60 is basically the same boat without the extended cockpit.

Alaskan 64 has slightly enlarged main salon, engineroom and cockpit. About 30 built to date.