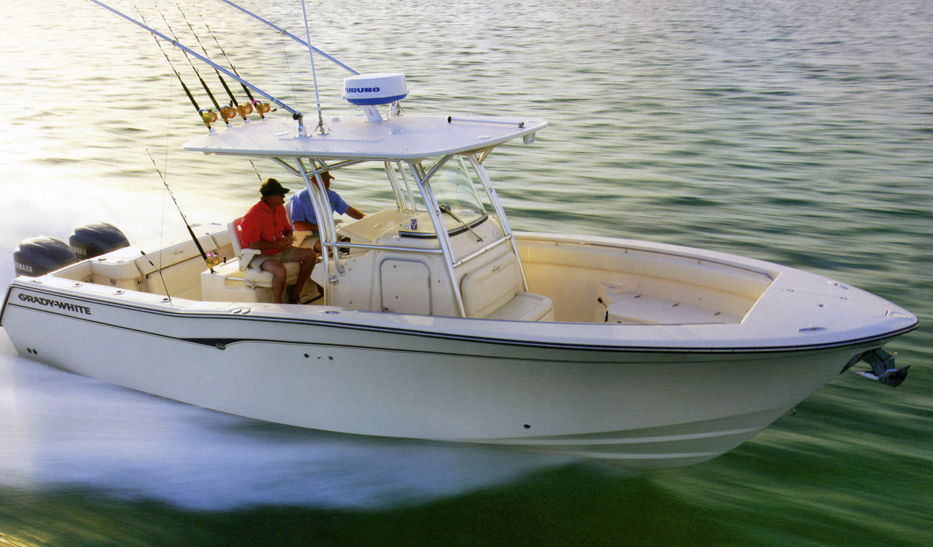 Name: 306 Bimini; 306 Canyon
Length: 30'6"
Hull Type: Deep-V
Gross Weight: --
Fuel Capacity: 290 gals.
Model Years: 1998—2019
Draft: --
Beam: 10'7"
Water Capacity: 20 gals.
Waste Capacity: --
Length w/ Pulpit: --
The Grady-White 306 Canyon (called the 306 Bimini in 1998–2009) is a beefy offshore fishing boat with an uncluttered cockpit, plenty of storage, and the great open-water ride common to all late model Grady-White boats. The 10'7"" beam of the 306 is wider than most boats in this class, and her deep cockpit offers an extra level of security when family and friends are aboard. Note that the full height windshield of the Grady-White 306 is integrated with the T-top. The standup head compartment has a marine toilet, freshwater sink, and hand-held shower. In 2006, a major redesign moved the livewell from the transom to behind the helm seats and eliminated the bow casting deck (with three fish/storage boxes under) with separate port and starboard seats. (A windlass and anchor chute also became standard.) The pop-up electronics console featured in the original 306 was dropped in the 2006 redesign in favor of a flush mount electronics area. In 2017 a new T-top design with full-height windshield became standard. The 306 has excellent range thanks to her generous 290-gallon fuel capacity. Fit and finish is second to none. Twin Yamaha 250s reach a top speed of just over 40 knots.