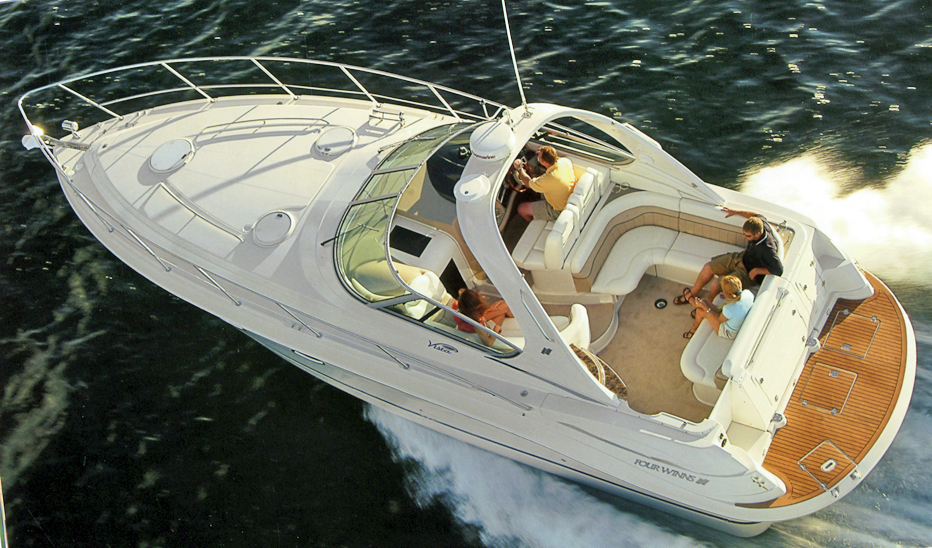 Name: 348 Vista; V358
Length: 37'0"
Hull Type: Modified-V
Gross Weight: --
Fuel Capacity: 230 gals.
Model Years: 2005—2009
Draft: 3'4"
Beam: 12'0"
Water Capacity: 51 gals.
Waste Capacity: 30 gals.
Length w/ Pulpit: --
Introduced in 2005 to replace the original Four Winns 348 Vista (2001–04), this new 348 Vista (that became the V358 in 2007) is agile, solid, and easy on the eye. Four Winns’ designers always manage to pack a lot of features into their express cruisers. While the cockpit and cabin accommodations of the V358 differ little from those found in most competitive models, her numerous thoughtful features make the difference. The salon table has fold-up ends making it easy to stow, and the foldout sofa converts to a double bed with no trouble at all. The sculptured cabin overhead (with indirect lighting) is a nice touch as well, something you won’t see on many of her rivals. A central vacuum system was standard, and there are two hanging lockers forward rather than just one. On the downside, the companionway steps are steep, and privacy curtains are a poor second to solid stateroom doors. Topside highlights include a sporty helm layout with space for electronics, double helm seat with flip-up bolsters, extended swim platform, transom storage locker, power engine hatch, and wet bar with icemaker. Crusader 375hp inboard gas engines top out at 30–32 knots; Crusader 375hp I/Os run a few knots faster.