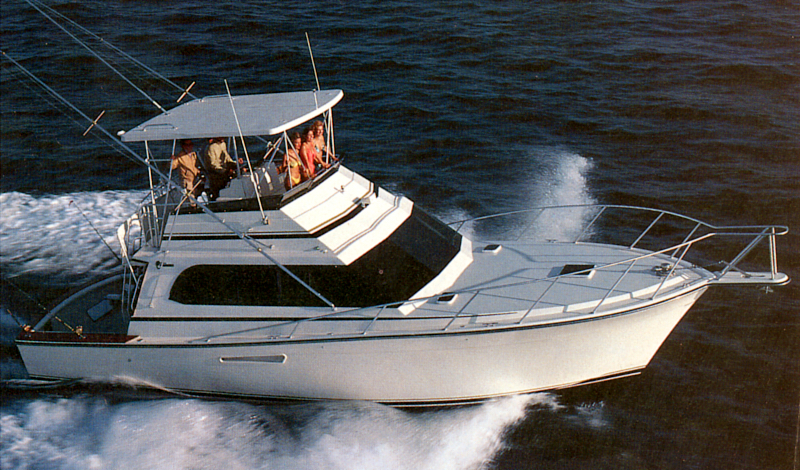 Name: 41 Convertible
Length: 40'10"
Hull Type: Modified-V
Gross Weight: --
Fuel Capacity: 500 gals.
Model Years: 1984—1989
Draft: 3'0"
Beam: 14'5"
Water Capacity: 80 gals.
Waste Capacity: --
Length w/ Pulpit: --
The Egg Harbor 41 Sport Fisherman stood out among most midsized convertible models of her era because of her huge cockpit and elegant interior accommodations. She was designed around a reworked Pacemaker 38 hull acquired by Egg Harbor when Pacemaker went out of business in 1980. A good-running boat with quick acceleration, the hull is a modified-V affair with moderate beam, a flat 8 degrees of transom deadrise, and balsa coring in the hullsides. She was introduced in 1984 in both a Sport Fisherman and a Convertible Sedan version, the difference being the larger salon and smaller cockpit of the Convertible. The upscale interiors of both boats are lush with furniture-quality teak joinery and paneling throughout. Outside, the exterior styling of the Egg Harbor 41 is very graceful, and when fitted with a full tower, she has a decidedly serious appearance. Gas engines were standard, but optional GM and Caterpillar diesels were the engines of choice for most. A pair of 375hp Cats cruise about 22 knots (26 knots top), and 6-71 Detroits cruise around 26 knots and reach a top speed in the neighborhood of 30 knots.