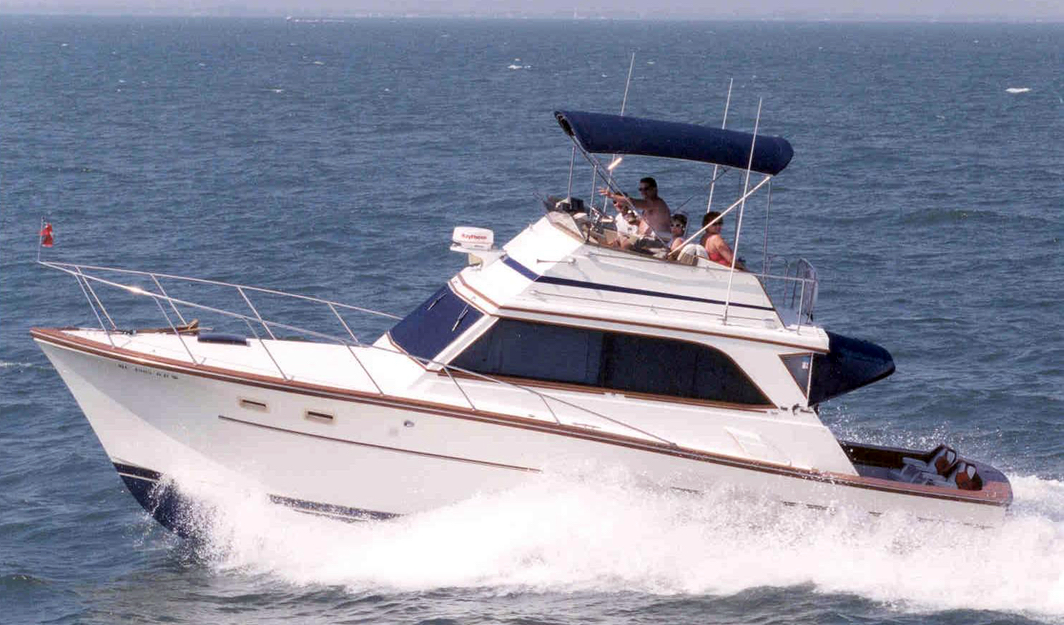 Name: 36 Sedan
Length: 36'0"
Hull Type: Modified-V
Gross Weight: --
Fuel Capacity: 260/320 gals.
Model Years: 1976—1985
Draft: 2'9"
Beam: 13'3"
Water Capacity: 75 gals.
Waste Capacity: 25 gals.
Length w/ Pulpit: --
A good many anglers find the 34–36-foot size range to be ideal in a family boat. The cockpit is usually large enough for fishing, and a good design will retain the maneuverability of a much smaller hull. Such a boat is the Egg Harbor 36 Sedan, an extremely popular boat for Egg Harbor during her production years and a boat still in demand in most used markets. She was built on a low-deadrise modified-V hull with a deep forefoot, moderate beam and flat aftersections. She’s not noted as the softest ride in a chop, but this is a very maneuverable boat, quick to accelerate and a competent head-sea performer. Early models were built with a glassed-over mahogany deckhouse, but in 1978 construction became all fiberglass. The Egg 36 has the teak cockpit sole and covering boards that many owners find appealing in spite of the maintenance. The interior can accommodate up to six depending on the floorplan (there were a total of four). A Tournament Fisherman model in 1978 featured an improved bridge layout with bench seating forward of the helm. The standard 350hp gas engines cruise at about 18–20 knots and top out in the high 20s.