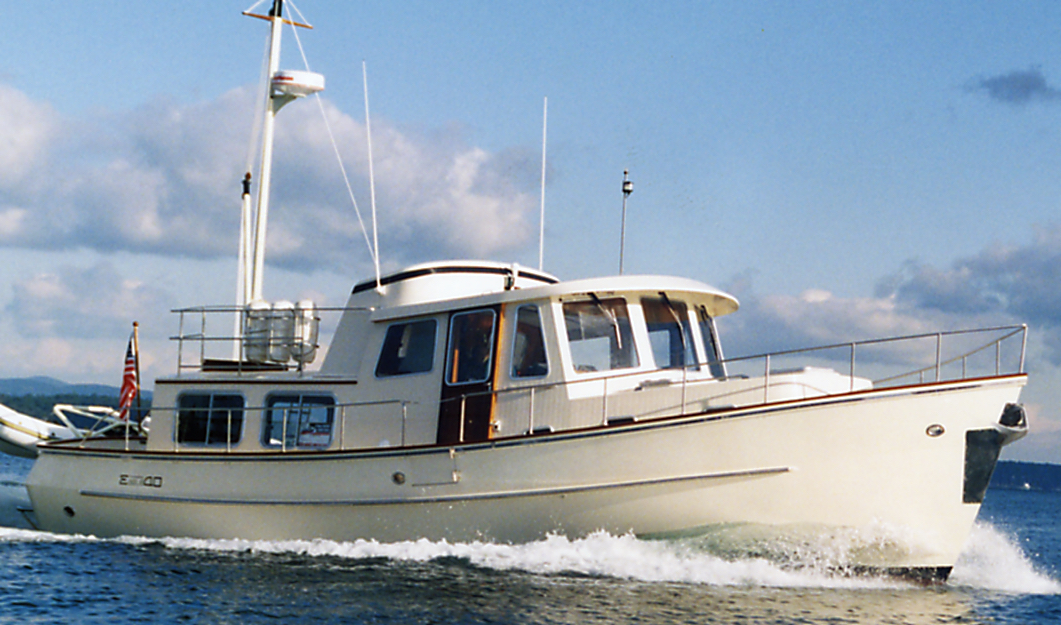 Name: 40 Pilothouse
Length: 40
Hull Type: Displacement
Gross Weight: --
Fuel Capacity: 400 gals.
Model Years: 1994—2002
Draft: 4'5"
Beam: 14'6"
Water Capacity: 240 gals.
Waste Capacity: 40 gals.
Length w/ Pulpit: --
The Eagle 40 will appeal to those who are looking for something different in a double-cabin cruising trawler. Indeed, her salty lines, graceful sheer and low-profile silhouette (note the fake stack behind the pilothouse) give her the businesslike appearance of a commercial workboat. Built in Taiwan by Transpacific Marine, she rides on a solid fiberglass semi-displacement hull with a relatively wide beam, flat aftersections, and a deep prop-protecting keel. The Eagle’s all-teak interior is offered with either one or two staterooms forward. The pilothouse is three steps up from the salon level and features a full-size settee with a table, port and starboard deck doors, and a hanging locker—or optional day head—to starboard. Note that a separate stall shower is found in the head in both the single- and twin-stateroom floorplans. Topside, the decks are teak and the upper helm station has a double-wide bench seat. Additional features include a functional mast and boom, a very spacious engine room, transom door, and well-secured side decks. Among several engine options, a single 135hp Sabre diesel will cruise at 8 knots, and a 225hp Perkins diesel will deliver speeds up to 11 knots.