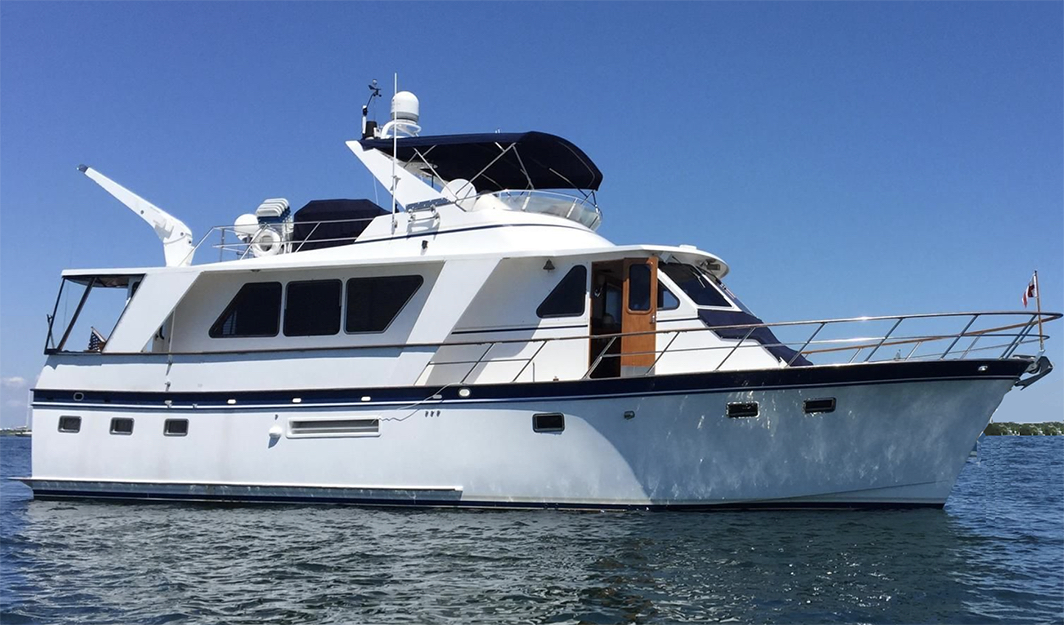 Name: 53 POC
Length: 52'7"
Hull Type: Semi-Disp.
Gross Weight: --
Fuel Capacity: 1,000 gals.
Model Years: 1986—1991
Draft: 4'8"
Beam: 16'6"
Water Capacity: 400 gals.
Waste Capacity: 80 gals.
Length w/ Pulpit: --
During the mid 1980s, the market demand for increased speed led Arthur DeFever to design several “Performance Offshore Cruiser” models of which the flush deck 53 POC proved the most popular. Where most previous DeFever yachts were built on low speed displacement hulls, the 53 POC rides on a semi-displacement hull capable of cruising speeds in the 12 to 14-knot range. The galley-up teak interior of the DeFever 53 is arranged with the salon, pilothouse, and aft deck all on a single level. A breakfast bar separates the U-shaped galley from the salon and a staircase opposite the salon settee offers private access to the 53’s full-beam owner’s stateroom with its walkaround queen bed and ensuite head. In the pilothouse, hinged deck doors access both port and starboard side decks, and a 9-foot settee doubles as a watch berth. In this layout, the VIP guest stateroom (with private ensuite head) is amidships rather than forward. The second guest stateroom with V-berths and private access to the day head is forward. The engine room has standing headroom. Cat 375hp diesels cruise at 12 knots. A total of 68 were built by Sen Koh Shipbuilding in Taiwan.