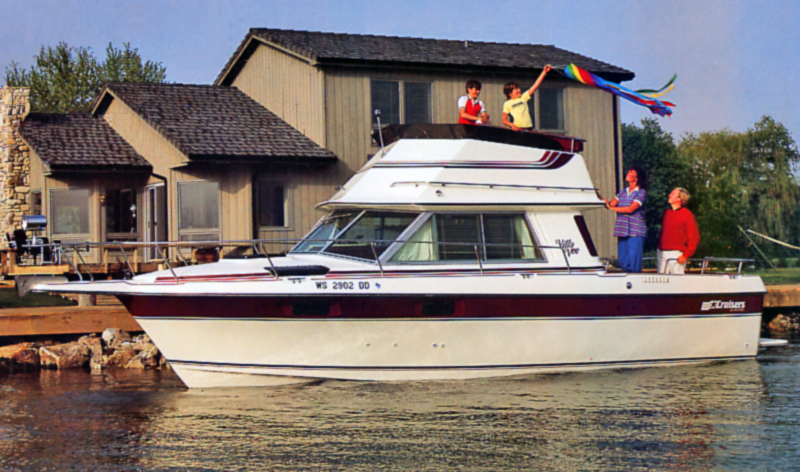 Name: 288-298 Villa Vee; 2980 Esprit
Length: 28
Hull Type: Modified-V
Gross Weight: --
Fuel Capacity: 150/180 gals.
Model Years: 1978—1990
Draft: 2'9"
Beam: 10'8"
Water Capacity: 45 gals.
Waste Capacity: --
Length w/ Pulpit: --
One of the smaller flybridge boats produced in recent years, the Cruisers 288 Villa Vee (called the 298 Villa Vee in 1984–87; 2980 Esprit in 1988–90) combined a sporty profile with upscale accommodations and surprisingly spirited performance. This was a popular boat for Cruisers—a rugged family cruiser whose versatile character insured an unusually long production run by the standards of her day. She was built on a solid fiberglass hull with moderate beam and prop pockets to reduce the shaft angles. Several single-stateroom interiors were offered during her production years, all with the galley down and a dinette in the salon. A lower helm was optional since many of these boats were sold in northern climates. While the cabin accommodations might best be described as compact, the cockpit is very spacious for a boat of this type with built-in stern seating and wraparound handrails. The side decks are narrow so bow access must be undertaken with care. Topside, a swivel helm chair and L-shaped settee will seat up to four persons. Among many engine options offered in the Villa Vee, twin 230hp gas engines cruise at 18 knots (25 knots top), and 260hp engines cruise at 20 knots and reach 28–29 knots top.