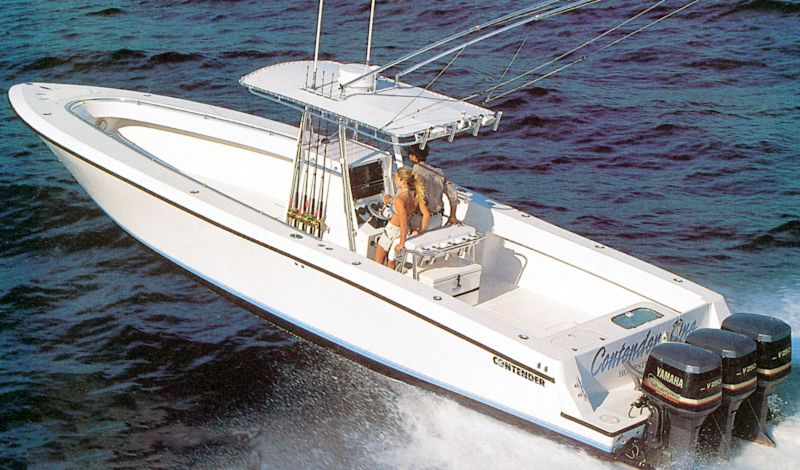 Name: 36 Open
Length: 36
Hull Type: Deep-V
Gross Weight: --
Fuel Capacity: 420 gals.
Model Years: 2000—2007
Draft: --
Beam: 10'0"
Water Capacity: 45 gals.
Waste Capacity: --
Length w/ Pulpit: --
The semicustom Contender 36 Open was one of the dominant offshore center consoles in the market during her production years. There were no compromises here; the Contender had more beam, more livewell space, more fuel, and more fish box capacity than most of the boats in her class. Designed from the ground up for triple engines, the 36 is a big boat with a huge deck area forward of the console and a large, clutter-free cockpit with room for several anglers. Getting around is easy—the console is small so the walkways are unusually wide. Note that there is no forward console seat. Standard features include twin 50-gallon transom livewells, four in-deck fish boxes (two forward, two aft), vertical rod holders (five on each side of the console), below deck rod storage, and a transom door. An optional coffin box lifts for access to a huge storage area beneath. With such a small console, the walk-in head compartment is a tight fit. The hull of the Contender 36 has often been cited for a wet ride and resale values have been mixed, maybe because so many were underpowered. Triple Yamaha F300s reach to top speed of over 50 knots. A sistership, the 36 Cuddy, has a V-berth and storage locker in the cabin.

Triple 250hp Yamaha outboards top out at close to 50 knots.