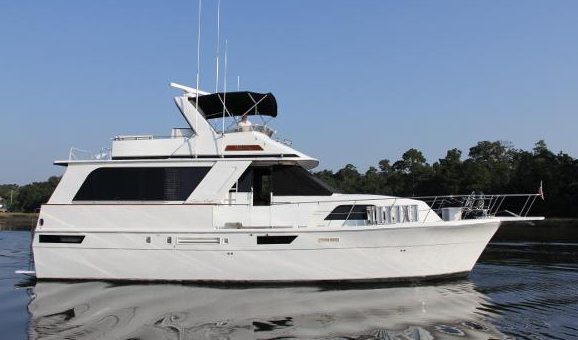 Name: 501 Motor Yacht
Length: 50'8"
Hull Type: Modified-V
Gross Weight: --
Fuel Capacity: 778 gals.
Model Years: 1987—1990
Draft: 4'6"
Beam: 15'5"
Water Capacity: 260 gals.
Waste Capacity: --
Length w/ Pulpit: --
The Chris Craft 501 Motor Yacht (called the 50 Constellation in 1990, her final year of production) is yet another refinement of the original Pacemaker 46 hull that passed to Uniflite in 1980 and, later, to Chris Craft in 1984. A handsome and good-selling yacht, her extended-deckhouse layout is aimed at those who prefer the increased interior volume of a full-width salon. While the 501 was built on a stretched Pacemaker/Uniflite hull mold, the deck and superstructure were new and designed by Chris Craft. By moving the pilothouse forward and relocating the engines farther aft, the 501 gains an expansive salon, genuine privacy in the aft cabin, and an engine room with standing headroom. A spiral staircase leads from the salon down to a roomy master stateroom where a tub is located in the adjoining head compartment. A galley-up arrangement joined the original galley-down layout in 1990. Since the walkaround side decks are eliminated in this wide-body configuration, Chris Craft designers thoughtfully added a small aft deck for line-handling duties. Cruising speed of the Chris 501 MY with 550hp GM 6V92TA diesels is 16–17 knots.