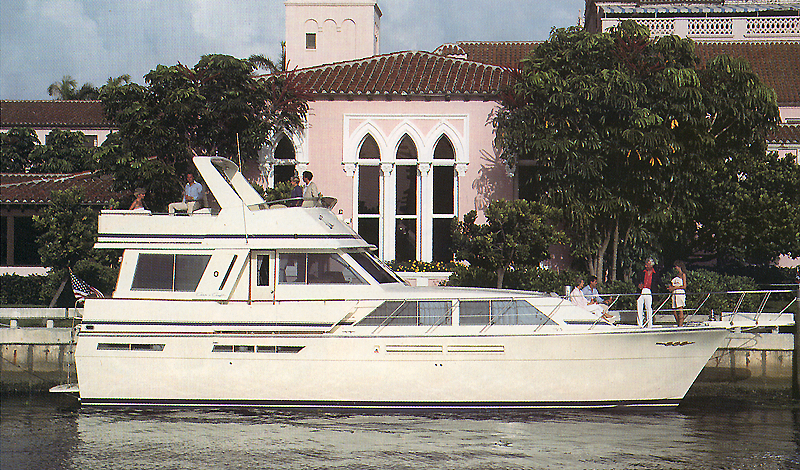 Name: 500 Constellation Motor Yacht
Length: 50'6"
Hull Type: Modified-V
Gross Weight: --
Fuel Capacity: 600 gals.
Model Years: 1985—1990
Draft: 4'4"
Beam: 15'3"
Water Capacity: 160 gals.
Waste Capacity: --
Length w/ Pulpit: --
The Chris 500 MY has a fairly complex history. She has her roots in the 1977 introduction of the Pacemaker 46 MY, a classic David Martin design with handsome lines and—for the late 1970s—a very luxurious interior. Following Pacemaker’s bankruptcy in 1980, Uniflite acquired the tooling and resumed producing the 46 in 1981 as the Uniflite 46 Motor Yacht. By late 1983 Uniflite designers had stretched the mold 4 feet (enlarging the salon) to create the Uniflite 50 Motor Yacht. It was a short production run because Uniflite closed the following year. Chris Craft then acquired the molds and in 1985 the 500 Constellation MY was introduced—essentially the same boat with no major changes. For those who admire the traditional styling of a flush-deck yacht, the 500 has much to offer. A lot of living space is available in her three-stateroom floorplan, including a fully enclosed and paneled aft deck that serves as a second salon. Unlike many flush-deck yachts, the flybridge is large enough to accommodate a small crowd. A good running boat with a comfortable ride, the 500 MY has a cruising speed of 16–18 knots with standard 550hp GM 6V92 diesels.