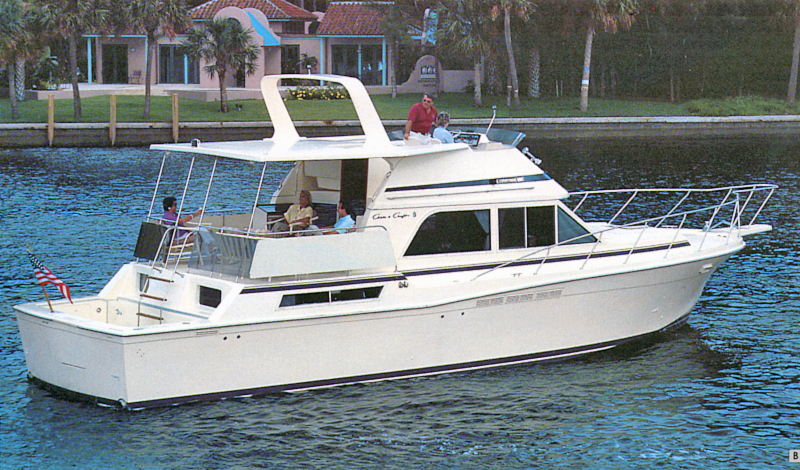 Name: 480 Catalina
Length: 48'0"
Hull Type: Modified-V
Gross Weight: --
Fuel Capacity: 600 gals.
Model Years: 1985—1989
Draft: 3'6"
Beam: 14'9"
Water Capacity: 160 gals.
Waste Capacity: 40 gals.
Length w/ Pulpit: --
The Chris Craft 480 Catalina (called the 480 Corinthian in 1985–86) is actually the old Uniflite 48 Yacht Fisherman that Chris Craft acquired when they took over the assets of Uniflite in 1984. A couple of things stand out about this yacht: for one thing, she rides on an easily driven semi-V hull noted for its efficiency and rough-water performance. And secondly, the 480 is a handsome boat even by today’s euroglitz standards. For those who haven’t noticed, the 480 is basically a cockpit version of the popular Chris 426/427 double cabin. Her standard two-stateroom, galley-and-dinette-down floorplan is arranged with a queen bed in the master stateroom and a double bed forward with a built-in vanity. (Note the tub in the aft head.) Not only is the cockpit large enough for some serious fishing, the aft deck is unusually spacious for a boat this size with room for entertaining a small crowd. While gas engines were standard (18–19 knots at cruise), optional 375hp Cat diesels cruise the Chris 480 Catalina around 20 knots with a top speed of 24–25 knots—impressive speeds for such modest power and reflective of an efficient, easily driven hull.