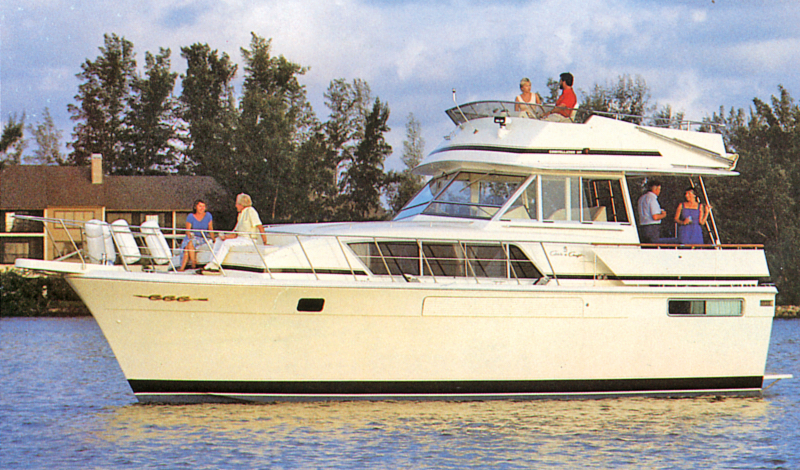 Name: 410 Commander
Length: 41'0"
Hull Type: Modified-V
Gross Weight: --
Fuel Capacity: 350 gals.
Model Years: 1972—1986
Draft: 3'3"
Beam: 14'0"
Water Capacity: 100 gals.
Waste Capacity: 40 gals.
Length w/ Pulpit: --
It’s a shame that Chris Craft never credited the designers of their boats because whoever drew the plans for the original Chris Craft 41 Motor Yacht had his finger right on the public pulse. This popular double-cabin design had an extended fifteen-year production run, the longest of any modern motor yacht design except the Hatteras 53 MY. Offering a spacious interior layout, the Chris 410’s flush deck profile makes her appear larger than she actually is. While her lines are obviously dated by today’s Euro-glitz standards, the addition of a restyled and enlarged flybridge in 1980 enhanced her profile considerably. Inside, the accommodations are comfortable and well arranged, especially in the master stateroom where a queen berth (optional in earlier models) became standard in 1981. Note that the 410 had several different interior floorplans available over the years with two of the more popular featured below. Various decor schemes were employed as well—some good and others not so good. Big-block 350hp gas engines were standard and provide a cruising speed of 15–16 knots and 24 knots top. With just 350 gallons of fuel, the 410’s range is limited to about 200 nautical miles.