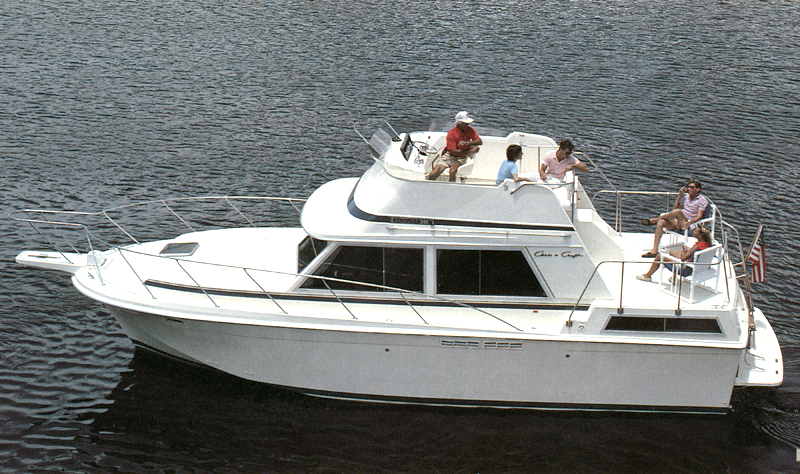 Name: 362 Catalina
Length: 36'0"
Hull Type: Modified-V
Gross Weight: --
Fuel Capacity: 250 gals.
Model Years: 1986—1987
Draft: 2'7"
Beam: 12'4"
Water Capacity: 100 gals.
Waste Capacity: --
Length w/ Pulpit: --
When Uniflite went out of business in 1984, Chris Craft immediately acquired the molds to the entire Uniflite line and turned nearly all of them into Chris Craft models. The 362 Catalina was one of those boats, a roomy aft-cabin cruiser that Uniflite had recently updated with a new flybridge and interior along with additional fuel. Aside from her practical galley-down floorplan with double berths fore and aft, the 362’s spacious flybridge and easy handling added much to her appeal as a family cruiser. Where a lower helm station was standard when Uniflite built the boat, it became an option when Chris Craft took over production. Removable hatches in the salon sole provide good access to the engine room, and wraparound cabin windows give the salon a very open appearance. Note that Chris Craft originally included a tub/shower in the aft head compartment but dropped that arrangement in 1987 in favor of a shower stall. Additional features include a full teak interior, relatively wide side decks, a swim platform, and good cabin storage. Built on a solid fiberglass hull, twin 270hp gas inboards cruise the 362 Catalina at 17–18 knots (mid 20s top).