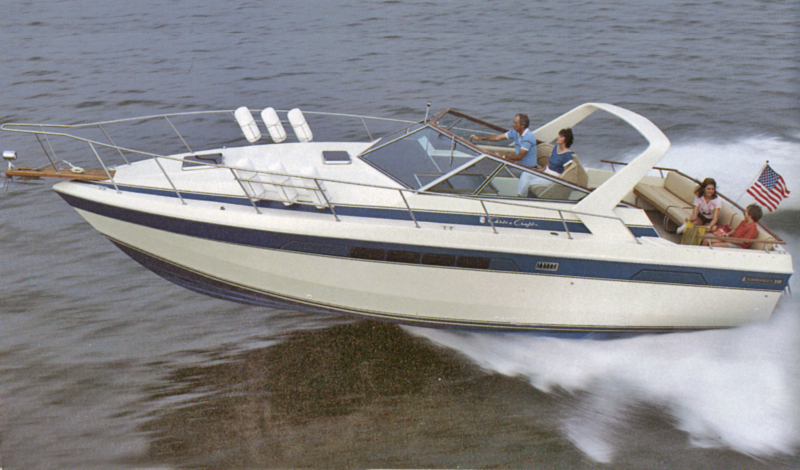 Name: 336 Mid Cabin Express
Length: 33'0"
Hull Type: Deep-V
Gross Weight: --
Fuel Capacity: 250 gals.
Model Years: 1983—1987
Draft: 2'9"
Beam: 12'1"
Water Capacity: 50 gals.
Waste Capacity: --
Length w/ Pulpit: --
The growing popularity of midcabin family cruisers in the early 1980s prompted Chris Craft to rework the interior of their popular 332 Express in order to create the look-alike 336 Mid-Cabin Express. Indeed, it’s difficult to tell the difference between the two boats until you step aboard and confront the raised bridge deck in the cockpit of the 336. The interior dimensions are about average for a 33-footer, and there were no significant changes to the midcabin layout over the years other than cosmetic updates. Both staterooms are fitted with privacy doors rather than curtains—something you never see any more in modern midcabin cruisers—and a vanity is fitted in the forward stateroom. A bench seat in the aft cockpit will seat four and it’s notable that the 336 did not have a transom door. Three removable hatches in the cockpit sole provide excellent engine access (although the bench seat must first be removed). The side decks are wide enough for secure foredeck access. A good open-water performer thanks to her deep-V hull, 340hp gas engines cruise the Chris 336 at 21 knots and reach a top speed of around 30 knots. Note that she was called the 336 Amerosport in 1987.