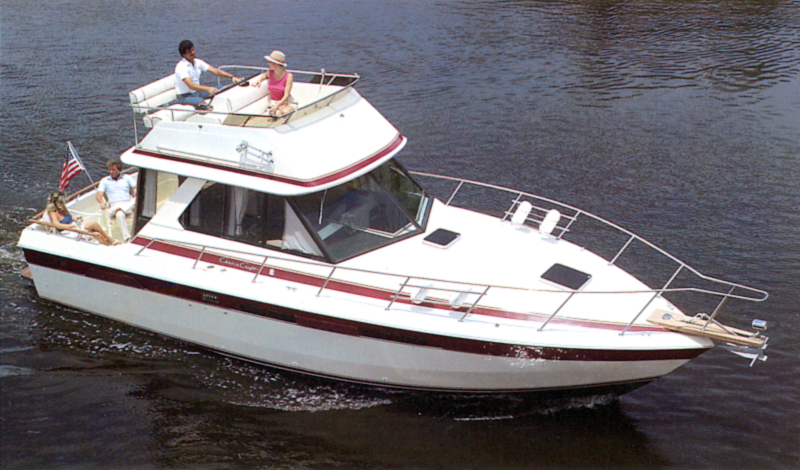 Name: 333 Sedan
Length: 33'0"
Hull Type: Deep-V
Gross Weight: --
Fuel Capacity: 250 gals.
Model Years: 1981—1987
Draft: 2'9"
Beam: 12'1"
Water Capacity: 50 gals.
Waste Capacity: --
Length w/ Pulpit: --
Sharing the same good-running deep-V hull used in the production of the 332 Express, the Chris Craft 333 Sedan is a traditional flybridge cruiser with a distinctive profile and an unusually open cabin layout. Construction is solid fiberglass, and a relatively wide beam creates a roomy interior with berths for six and good headroom throughout. The floorplan of the Chris 333 is arranged with the galley and dinette forward, a few steps down from the salon. A lower helm was standard, and a double berth is found in the single stateroom. While the cockpit isn’t large enough for a fighting chair and includes no livewell or fish box, it’s still big enough for a couple of light-tackle anglers. Topside, the small flybridge will seat three on a single bench seat. In 1984, the deckhouse profile was redesigned for a more modern appearance, and in 1986—the last year of production—a revised flybridge relocated the helm farther aft and added bench seating forward of the console. A good rough-water performer, standard 350hp Crusader gas engines cruise the Chris 333 Sedan comfortably at 20 knots and deliver a top speed in the neighborhood of 30 knots.