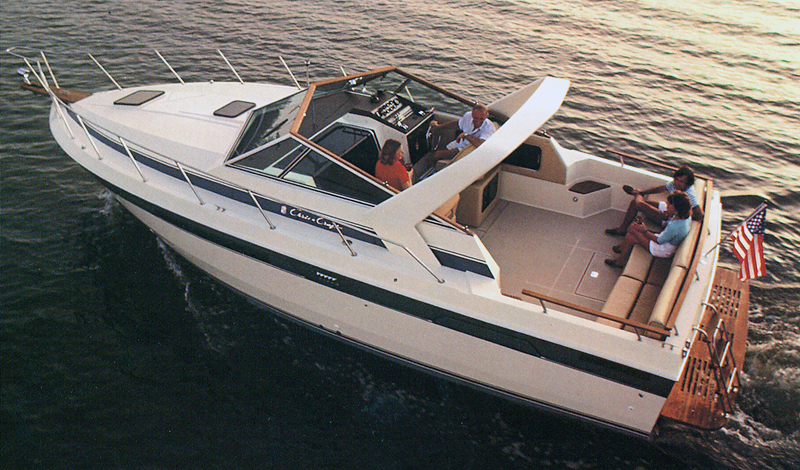 Name: 332 Express
Length: 33'0"
Hull Type: Deep-V
Gross Weight: --
Fuel Capacity: 250 gals.
Model Years: 1981—1987
Draft: 2'9"
Beam: 12'1"
Water Capacity: 50 gals.
Waste Capacity: --
Length w/ Pulpit: --
A popular boat for Chris Craft in the early 1980s, the 332 Express (called the 332 Amerosport in 1986) is unusual in that she was built on a deep-V hull—a rare platform for a dedicated family cruiser. Deep-V hulls tend to roll a lot in a beam sea (especially at slow speeds), and they aren’t noted for their fuel efficiency, but they do have superb rough-water handling qualities—a characteristic that sets the 332 Express apart from most of the competition. Note that this is a pure express boat with a flush cockpit and straight inboard power. She underwent several updates over the years including the addition of a radar arch in 1983, and in 1986 the floorplan was slightly rearranged and a bolt-on swim platform was added at the transom. While her interior isn’t unusually roomy for a 33-footer, the 332 has one of the larger cockpits to be found in a boat this size—large enough for a couple of anglers to do some serious fishing. (Indeed, the oversize cockpit more than compensates for the somewhat compact cabin accommodations.) With 350hp big-block inboard gas engines, the 332 Express will cruise comfortably 20–22 knots (close to 30 knots top).