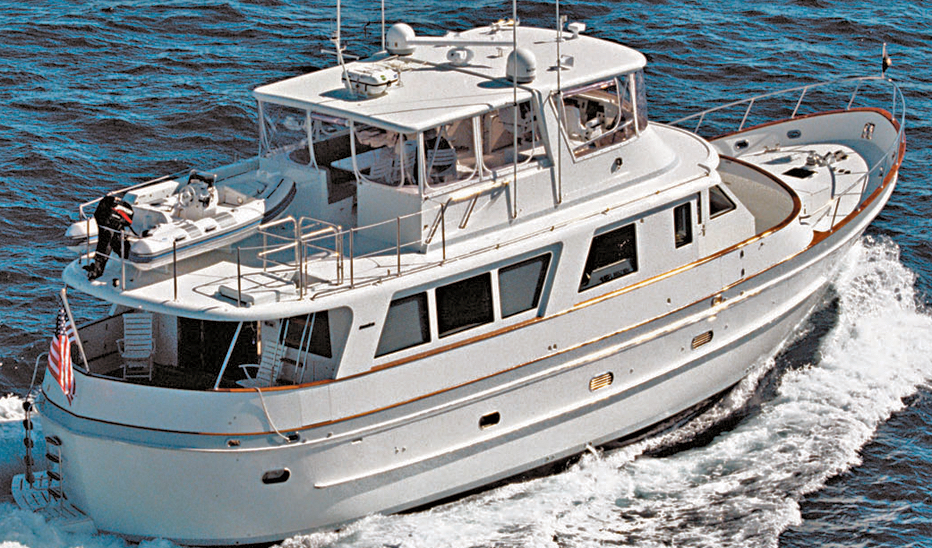 Name: 66 Long Range Cruiser
Length: 66
Hull Type: Displacement
Gross Weight: --
Fuel Capacity: 2,700 gals.
Model Years: 1978—2003
Draft: 5'3"
Beam: 18'0"
Water Capacity: 700 gals.
Waste Capacity: 250 gals.
Length w/ Pulpit: --
A popular yacht for many years, the first Cheoy Lee 66 Long Range Cruiser was imported back in 1978. Twelve were sold in the U.S. through 1983, and in 1984 Cheoy Lee updated the boat’s appearance with a lowered deckhouse profile and considerably less exterior teak. Hull construction is solid fiberglass, and the rounded stern of the 66 is her most distinctive design feature. The standard five-stateroom, galley-up floorplan provides comfortable accommodations for up to twelve people. A four-stateroom, galley-down layout (not pictured) was also available. Like most Asian yachts, the teak interior drips with old-world elegance. Bridge overhangs protect the wide walkways of the 66, and the flybridge has seating for several guests as well as dinghy storage and a davit. Note that a Widebody model, with a full-width salon and enlarged wheelhouse, was introduced in 1985 and accounted for about half of late-model production. Twin 325hp GM (or 320hp Cat) diesels cruise at 10 knots (12–13 knots top). Cheoy Lee built this boat until 2003 on a semi-custom basis. In later models the transom incorporates a molded staircase to allow easier access to the water.