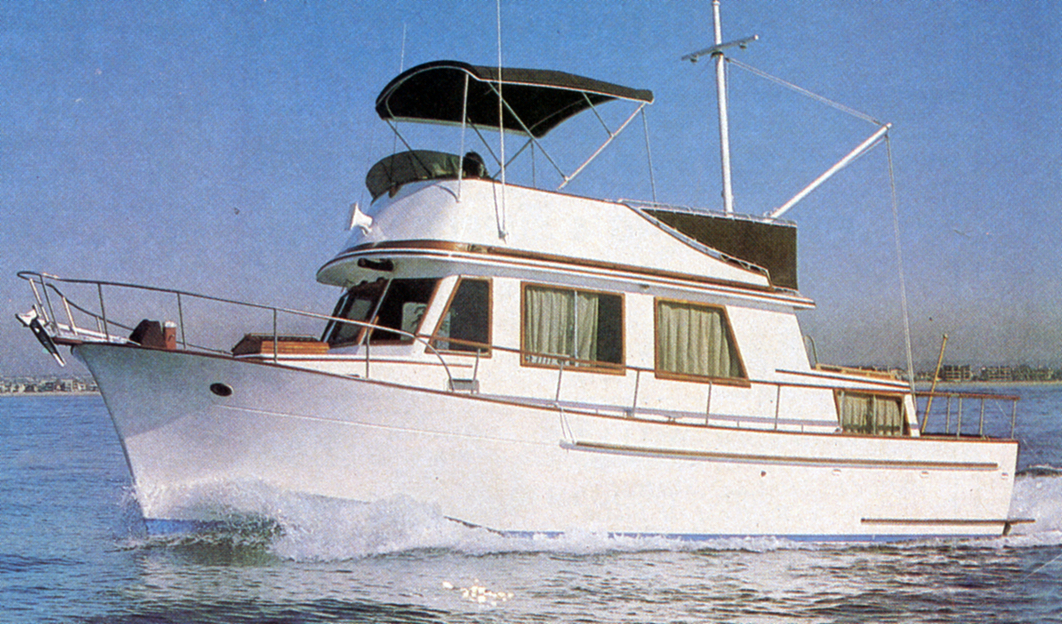 Name: 34 Double Cabin
Length: 34
Hull Type: Semi-Disp.
Gross Weight: --
Fuel Capacity: 300 gals.
Model Years: 1972—1985
Draft: 3'6"
Beam: 11'9"
Water Capacity: 150 gals.
Waste Capacity: 40 gals.
Length w/ Pulpit: --
Imported by Marine Trader, the CHB 34 remains the best-selling small trawler ever sold in the U.S. market. She enjoyed her best years during the 1970s when fuel prices were increasing and powerboats, with their big, fuel-guzzling engines, were out of favor. As the years rolled by, however, aging sailors and retired couples rediscovered the CHB 34, finding much to like in her ease of operation and remarkable fuel economy. Built on a solid fiberglass hull with a long, prop-protecting keel, there were several notable updates to the 34 over the years. Prior to 1975 she was built with a plywood house with a fiberglass cloth overlay. Until 1985 the decks were teak-planked and fastened through fiberglass to a balsa sub-deck—a constant source of deck leaks. After 1985 the CHB 34 was constructed with a single-piece fiberglass deck and deckhouse. The flybridge was revised in 1991, and the teak window frames were eliminated in 1992. Below deck, the all-teak interior is arranged with small staterooms fore and aft, two heads, and a deck access door from the aft stateroom to the cockpit. A lower helm is standard. A single 120hp Lehman diesel will cruise at 6–7 knots burning just 2–3 gallons per hour.

Compact layout with parquet flooring is comfortable for two, crowded for four. Storage space is at a premium, especially in galley.

Built with plywood house before 1975. Decks were teak-planked until 1985 (a constant source of leaks); teak-over-fiberglass thereafter. Teak window frames eliminated in 1992. Over 1,600 built.