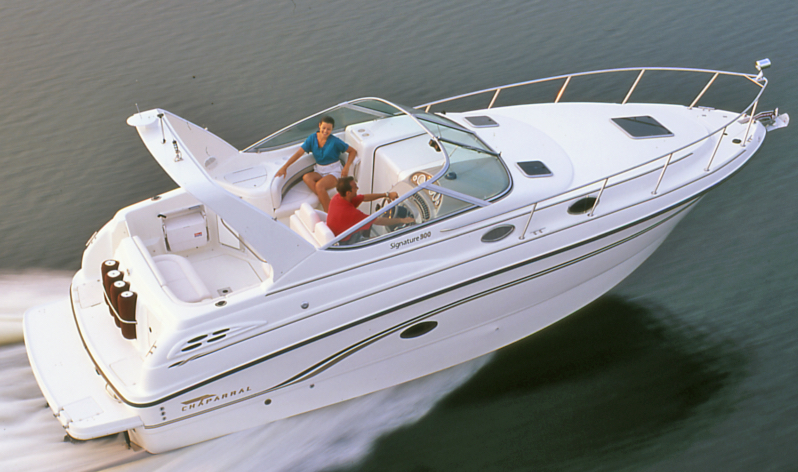 Name: 30-31 Signature
Length: 30, 31
Hull Type: Modified-V
Gross Weight: --
Fuel Capacity: 150 gals.
Model Years: 1990—1997
Draft: --
Beam: 10'9"
Water Capacity: 40 gals.
Waste Capacity: --
Length w/ Pulpit: 33'2"
Chaparral has always enjoyed an industry reputation for quality products. No surprise, then, that the Signature 30 (called the Signature 31 from 1993–97) was considered one of the more sophisticated express boats in her class during the 1990s. Like all Chaparral models, she was built on a modified-V hull with moderate beam and a solid fiberglass bottom. Her midcabin interior is arranged in the conventional manner with double berths fore and aft and a convertible dinette in the salon. Both sleeping areas are fitted with privacy curtains, and it’s worth noting that the galley can best be described as compact. On deck, the cockpit floor is flush from the transom forward—rare in a midcabin cruiser. The L-shaped lounge opposite the helm converts (with the aid of an insert) into a sun pad and the bench seat at the transom folds away into the transom bulkhead when not in use. The helm console was updated in 1993 (among a few other upgrades). Additional features include plenty of cockpit storage, a hidden swim ladder, serviceable side decks, and a radar arch. A good performer, twin 230hp MerCruiser (or 250hp Volvo) sterndrives cruise the Signature 31 at 18 knots and reach 30+ knots wide open.