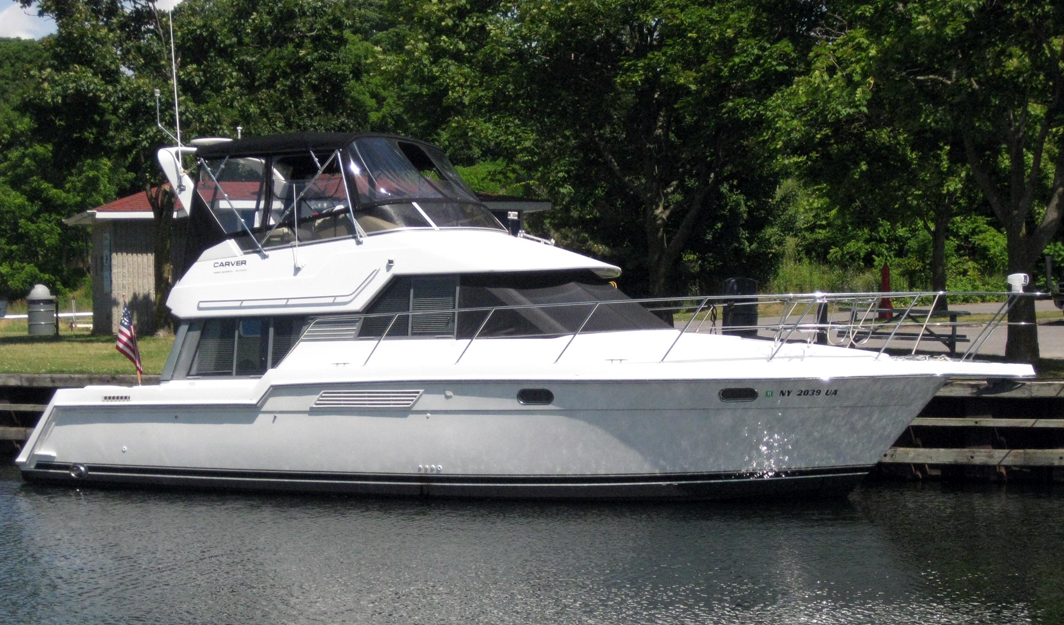 Name: 370-374 Voyager
Length: 37'1"
Hull Type: Modified-V
Gross Weight: --
Fuel Capacity: 297 gals.
Model Years: 1993—2002
Draft: 3'8"
Beam: 13'3"
Water Capacity: 83 gals.
Waste Capacity: 35 gals.
Length w/ Pulpit: --
Introduced in 1993, the Carver 370 Voyager (called the 374 Voyager in 2002–2002) will appeal to those who appreciate the versatility and comfort of a pilothouse layout. Easily handled by a crew of two, the Voyager’s tri-level interior is unusual in a small coastal cruiser. With a sofa in the salon, convertible dinette forward, and two private staterooms, the Voyager provides berths for as many as seven people. The galley features a side-by-side refrigerator/freezer, microwave oven, and plenty of counter and storage space. A head with separate stall shower is adjacent to both staterooms. Most Voyagers were sold with a fully instrumented lower helm to starboard. The teak interior is well finished, and large wraparound cabin windows provide panoramic views of the water. In 1999, the interior was completely revised with the salon moved forward to the bridge deck level and the galley/dinette moved aft, adjacent to the entryway. Topside, the flybridge has dual helm chairs and seating for six. Note that the Voyager’s exterior styling was slightly updated in 2000. Crusader 350hp gas engines cruise at 16–18 knots. Optional 230hp Volvo (or 220hp Cummins) diesels cruise at 18 knots.