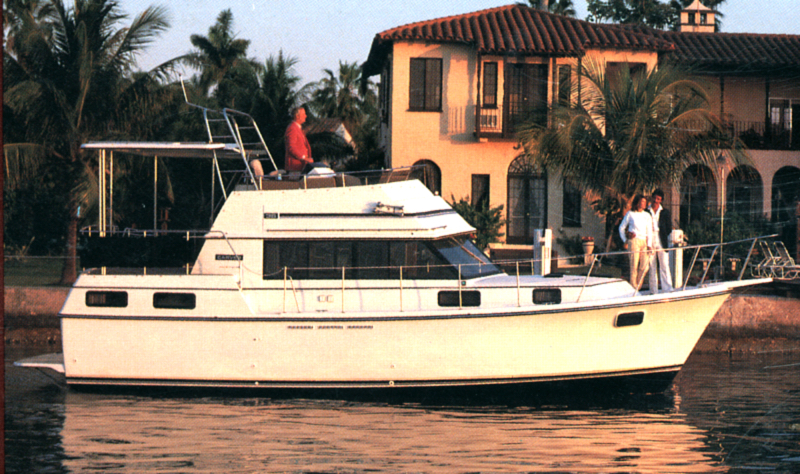 Name: 3607 Aft Cabin
Length: 36
Hull Type: Modified-V
Gross Weight: --
Fuel Capacity: 240 gals.
Model Years: 1982—1989
Draft: 3'2"
Beam: 12'6"
Water Capacity: 109 gals.
Waste Capacity: --
Length w/ Pulpit: --
Among the top-selling boats in her class for several years, the Carver 3607 Aft Cabin was the biggest boat ever built by Carver when she was introduced in 1982. Immediately successful due to her smart styling and space-efficient layout, the 3607 was built on a so-called “dual mode” hull, meaning that she can run efficiently at her 8-knot hull speed and still plane out when the throttles are fully applied. (Note that this same hull was later used in the production of the popular Carver 36 Mariner.) The interior accommodations of the 3607 Aft Cabin are surprisingly roomy for a 36-footer and Carver offered a pair of two-stateroom floorplans to choose from. Plan A has sleeping accommodations for eight with a dinette that converts to a double berth, while Plan B sleeps six and features a raised lounge offering seating for five. A lower helm was standard in both layouts as was a tub/shower in the aft head. Outside, the aft deck is large enough for a few folding chairs, and the bridge is only three steps up with guest seating for four. The side decks are wide enough for easy bow access—a plus on any small cruiser. Standard 350hp Crusader gas engines will cruise the 3607 Aft Cabin at 15–16 knots.

Numerous opening ports permit good cabin ventilation. Wide side decks are a plus.