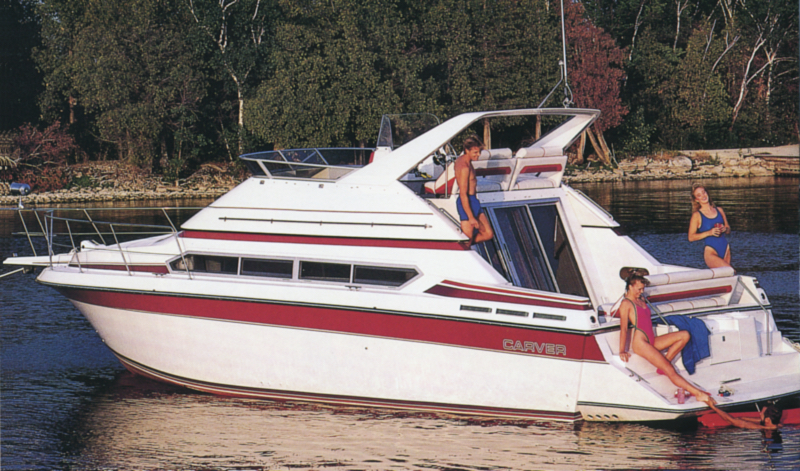 Name: 3067 Santego; 634 Santego; 340 Santego
Length: 33'7"
Hull Type: Modified-V
Gross Weight: --
Fuel Capacity: 150 gals.
Model Years: 1988—1994
Draft: 3'1"
Beam: 11'0"
Water Capacity: 48 gals.
Waste Capacity: 30 gals.
Length w/ Pulpit: --
A popular model, the Carver 3067 Santego (called the 634 Santego in 1991–92; 340 Santego in 1993–94) is a roomy express-bridge cruiser whose versatile layout and spacious accommodations hit the sweet spot with a lot of boaters. Aside from her sleek low-profile appearance, the Santego’s most impressive feature is her roomy interior. Down three steps from the cockpit level, the full-beam salon—the Santego has no side decks—is huge for a boat this size with facing settees and full standing headroom. The entire floorplan is laid out on a single level which adds greatly to the impression of size and space. With her private stateroom and convertible dinettes, there are sleeping accommodations for as many as five. Note that a walk-through gate forward of the helm (for improved foredeck access) was introduced in 1991. A transom seat in the cockpit was standard, and hatches in the sole provide good access to the motors. On the downside, the Santego’s bolt-on swim platform (with fender storage racks) looks like an afterthought. Twin 270hp V-drive inboards cruise at 20–22 knots (high 20s top). Sterndrive 300hp gas engines top out at over 30 knots.