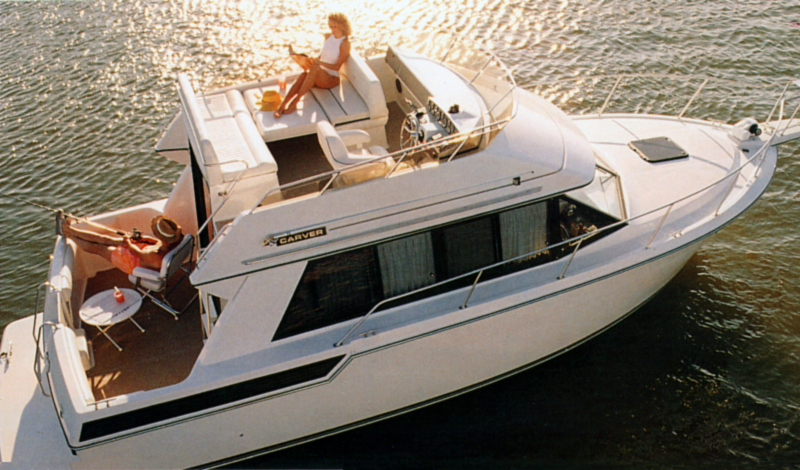 Name: 2828 Command Bridge; 300 Sedan
Length: 28
Hull Type: Modified-V
Gross Weight: --
Fuel Capacity: 150 gals.
Model Years: 1991—1993
Draft: 2'11"
Beam: 11'10"
Water Capacity: 51 gals.
Waste Capacity: --
Length w/ Pulpit: --
The Carver 2828 Command Bridge (called the 300 Sedan in her final year of production) is one of the largest 28-foot flybridge boats built by any manufacturer in recent years. She was constructed on a solid fiberglass modified-V hull, and her wide 11'10"" beam provides the stability necessary in a small flybridge boat. Designed for coastal and inland waters, two floorplans were offered, one with a lower helm and a small head compartment and the other (less popular) with a large head forward but no lower helm. Berths are provided for up to six in either layout, and a solid door (rather than just a curtain) provides stateroom privacy. The generous interior accommodations of the Command Bridge result in a very small cockpit. The flybridge, however, is huge for a 28-footer with guest seating that converts into a sun lounge. Hatches in the cockpit sole provide access to the engines, and the V-drives are reached through the salon sole. Additional features include a bow pulpit, swim platform, transom door, and a handheld cockpit shower. Among several engine options, twin Crusader 260hp gas engines cruise the Carver 2828 at 16–18 knots (mid 20s top).