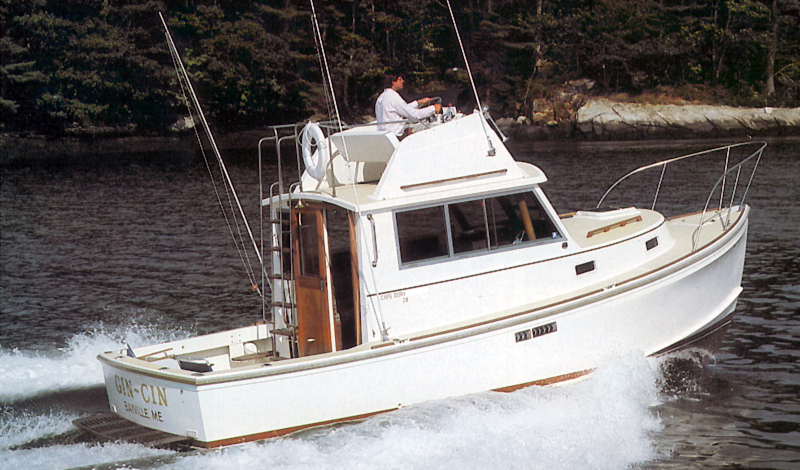 Name: 28 Flybridge Cruiser
Length: 27'11"
Hull Type: Semi-Disp.
Gross Weight: --
Fuel Capacity: 120 gals.
Model Years: 1985—1991
Draft: 2'9"
Beam: 9'11"
Water Capacity: 71 gals.
Waste Capacity: 25 gals.
Length w/ Pulpit: --
Introduced in 1985 and lasting a decade in production, the Cape Dory 28 Flybridge is a graceful Down East-style cruiser whose lobster-boat heritage can be seen in her salty workboat profile. She was available in several configurations over the years—the Flybridge model pictured above proved very popular as did the Open—and a number were produced for commercial applications. The 28 was built on an easy-riding semi-displacement hull with a moderate beam, rounded bilges, and a fully protected prop. The Flybridge and Open models both have a single-stateroom floorplan with a V-berth forward, a compact galley, and an enclosed, standup head compartment. Note that in 1990 several upgrades were made, including a reengineered and retooled flybridge. Additional features include wide side decks, good service access to the engine, and sliding cabin windows in the Flybridge model. Most Cape Dory 28s were fitted with the optional 200hp Volvo diesel (about 14 knots cruise/17 knots top) rather than the once-standard single gas engine. A very popular boat, over 220 Cape Dory 28s (mostly flybridge models) were built during her production years.