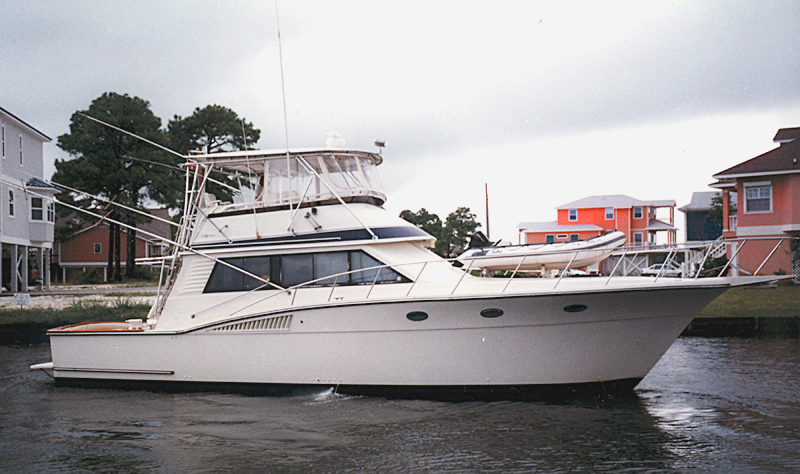 Name: 48 Convertible
Length: 48'5"
Hull Type: Modified-V
Gross Weight: --
Fuel Capacity: 760 gals.
Model Years: 1986—1989
Draft: 4'8"
Beam: 15'2"
Water Capacity: 210 gals.
Waste Capacity: 70 gals.
Length w/ Pulpit: --
The 48 Convertible was the largest flybridge sportfishing boat produced by Californian during the company’s many years of production. Built on a solid fiberglass hull with a well-flared bow and a shallow keel, the 48 is not recalled as having been a notably good-selling boat. Her standard three-stateroom layout was arranged with the galley and dinette forward in the salon and an amidships owner’s suite, while an alternate two-stateroom floorplan with a mid-level galley opened up the salon considerably. A relatively narrow beam and wide side decks result in salon dimensions that are very modest compared with other boats her size. Early models came with dark walnut interior woodwork; after 1988 it was teak. A transom door was standard in the cockpit, and the tournament-style flybridge was arranged with lounge seating forward of the helm console. Additional features included separate stall showers in both heads, a molded pulpit, transom door, and wide side decks. Among several engine options, a pair of 550hp 6V92s cruise the Californian 48 at 21 knots (around 24 knots top). Larger 650hp 8V92s improve those speeds to 24 knots cruise and 27 knots top.