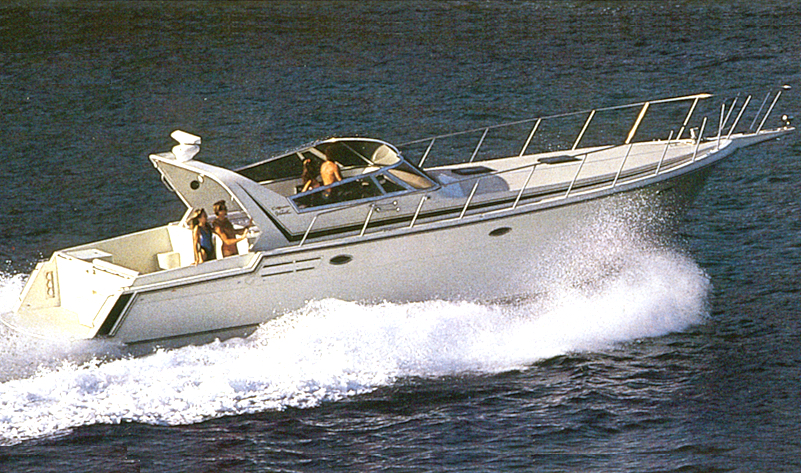 Name: 44 Veneti
Length: 44
Hull Type: Modified-V
Gross Weight: --
Fuel Capacity: 400 gals.
Model Years: 1988—1989
Draft: 4'0"
Beam: 15'2"
Water Capacity: 190 gals.
Waste Capacity: --
Length w/ Pulpit: 47'10"
Increasingly dated by today’s Eurostyle sportboats, the Californian 44 Veneti remained a fairly popular boat on the used market for several years she went out of production in 1989. Interestingly, she was one of the first American sport cruisers to employ an integrated swim platform—something just about every express-boat builder embraced by the early 1990s. Below deck, the Veneti’s floorplan is arranged with two private staterooms and two full heads—still an unusual layout since most 40–45-foot express boats have a single stateroom and one head. Consequently, the salon dimensions are much smaller than one expects to find in boat this size. While visibility from the elevated helm is good, the console—with its various levels of gauges and switches—is best described as confusing. Additional features include a big engine room, a bow pulpit, a cockpit wet bar, wide side decks, radar arch, and good storage. Note that the Veneti’s original hull design made for a wet ride until spray rails were added early in 1989. No racehorse in spite of her sleek profile, twin 375hp Caterpillar diesels cruise the Californian 44 Veneti at 20–21 knots and reach a top speed of about 24 knots.