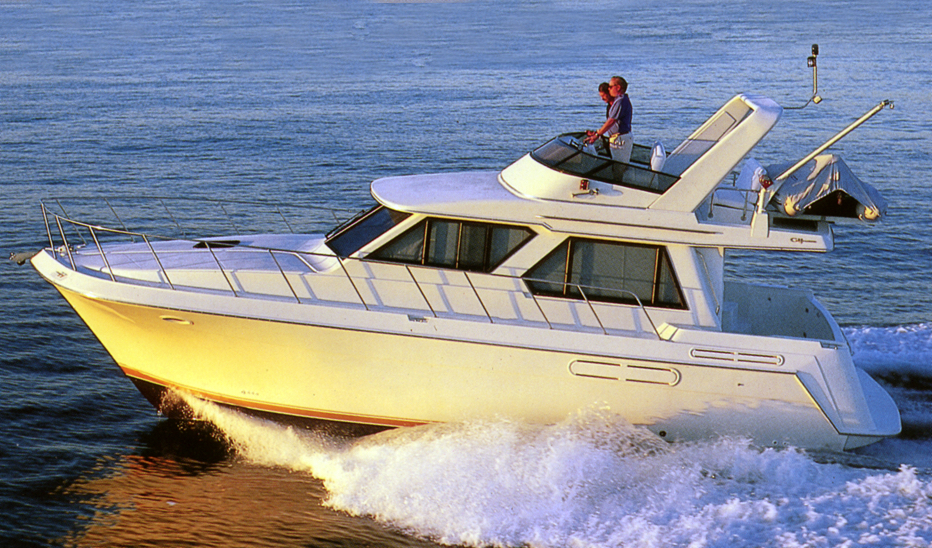 Name: 39 SL
Length: 39'0"
Hull Type: Modified-V
Gross Weight: --
Fuel Capacity: 250 gals.
Model Years: 1999—2003
Draft: 4'4"
Beam: 15'0"
Water Capacity: 100 gals.
Waste Capacity: --
Length w/ Pulpit: --
The Californian brand was revived in 1999 with the introduction of the Californian 39 SL, the first of a new series of Californian yachts built by the same owners who developed the original Californian designs back in the early 1970s. The 39 SL is a twin-stateroom cruising yacht distinguished by her conservative styling and very affordable price. Built the old-fashioned way on a solid fiberglass hull, the unusual interior of the 39 SL is certainly her most notable feature. Stepping into the bi-level salon, the location of the dinette—centered on the pilothouse level, next to the helm—is unique. The galley—to starboard in the salon—extends forward into the pilothouse where the raised floor reduces the counter’s height, making it awkward to use. There are two double staterooms and two full heads on the lower level, and if the interior of the 39 SL is a little plain, visibility from the lower helm is excellent. A stairway leads from the small cockpit to the bridge, which is large enough to accommodate a dinghy and davit. A radar arch, transom door, and generator were standard. Volvo 318hp diesels cruise at 20 knots (low 20s top).