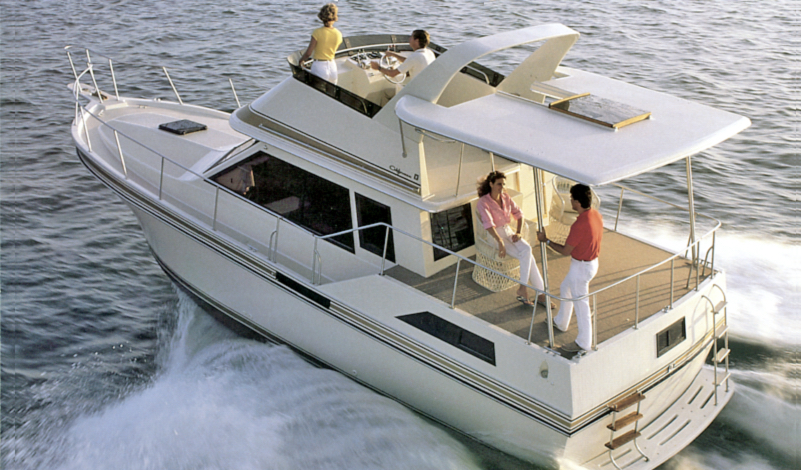 Name: 35 Motor Yacht
Length: 34'11"
Hull Type: Modified-V
Gross Weight: --
Fuel Capacity: 270 gals.
Model Years: 1985—1987
Draft: 3'2"
Beam: 12'4"
Water Capacity: 75 gals.
Waste Capacity: 40 gals.
Length w/ Pulpit: --
Building a double-cabin yacht on a 35-foot hull is no easy trick, and the results are generally less than satisfactory from the standpoint of styling. In that regard, the Californian 35 Motor Yacht was something of an exception in that her lines are actually very attractive considering her small size. She was built on the same hull used for Californian’s 35 Convertible model, a beamy modified-V affair with a shallow keel and plenty of flare at the bow. Her two-stateroom interior is, of course, rather compact and it comes as a surprise that Californian engineers were able to find the room for a separate stall shower in each head. A lower helm was optional, the dinette converts into a double berth, and there are twin double beds in the aft stateroom. This is a lot of interior for a 35-footer and there’s room in this boat for the entire family. The aft deck is large enough for a couple of deck chairs (the hardtop in the picture above was optional), and wide side decks provide safe access to the bow. Gas engines were standard, but many Californian 35 Motor Yachts were sold with optional 210hp Cat diesels (15–16 knots cruise).