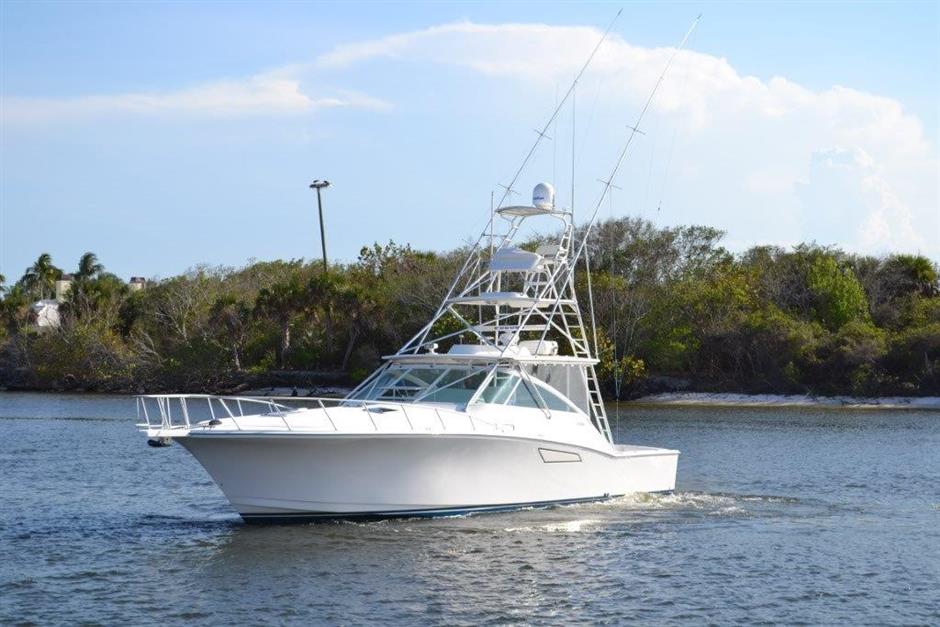 Name: 45 Express
Length: 45
Hull Type: Modified-V
Gross Weight: --
Fuel Capacity: 800 gals.
Model Years: 1997—2009
Draft: 4'0"
Beam: 15'8"
Water Capacity: 100 gals.
Waste Capacity: 40 gals.
Length w/ Pulpit: 48'1"
One of the largest express fishermen available, the premium price of the Cabo 45 is enough to bring all but the most affluent anglers to their knees. She’s constructed on a beamy modified-V hull with cored hullsides, a deep forefoot, and a well-flared bow. Aside from her rakish profile, perhaps the most distinctive feature of the Cabo 45 is her huge bridge deck with its centerline helm, integral electronics console, and expansive lounge seating. The fully equipped cockpit comes with a transom livewell, a beautifully designed tackle center, and two huge in-deck fish boxes. The engine room, beneath the bridge deck, is massive. The standard single-stateroom interior of the Cabo 45 is meticulously finished, and the spacious salon provides seating for a small crowd. (Note that a two-stateroom interior became available in 1999.) Additional features include storage for over 20 rods, an electrically controlled windshield vent, and a transom door with gate. Among several diesel options, 660hp Cats cruise the Cabo 45 at 25 knots (about 30 knots top), and 800hp Cats cruise at 28–29 knots. Over 100 were built.