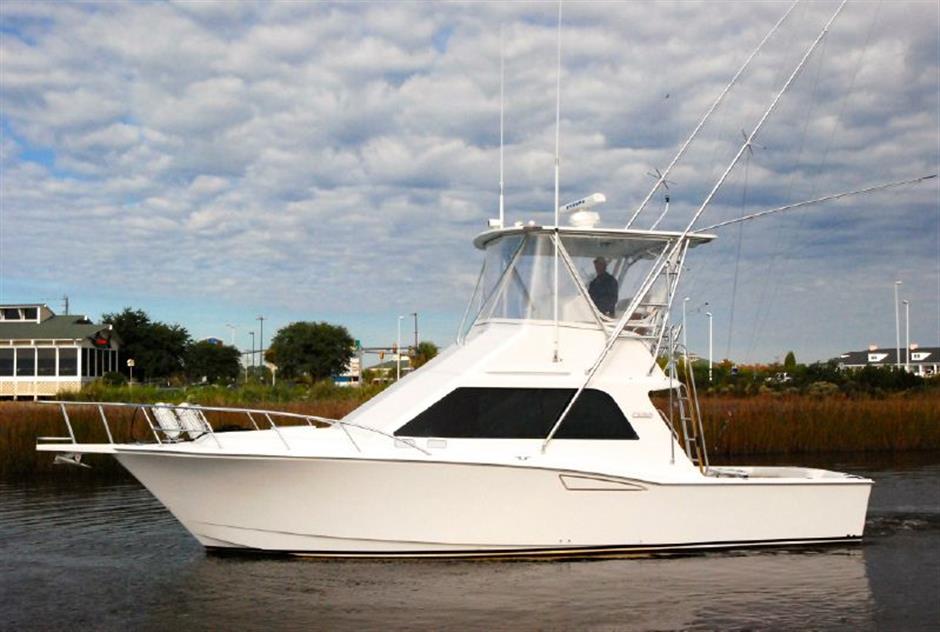 Name: 35 Flybridge
Length: 35
Hull Type: Modified-V
Gross Weight: --
Fuel Capacity: 400 gals.
Model Years: 1992—2008
Draft: 2'6"
Beam: 13'0"
Water Capacity: 100 gals.
Waste Capacity: 16 gals.
Length w/ Pulpit: 37'6"
Cabo’s first boat, the Cabo 35 Flybridge ranks among the most popular boats of her type built in recent years. Where many small flybridge boats have a tall profile, Cabo kept the height of the 35 low by placing the motors in cockpit engine boxes (rather than under the salon sole), which both lowers her profile and makes for a more comfortable ride. Built on a modified-V hull, early models were often criticized for their poor head-sea performance. Those issues were successfully resolved in 2000 when the hull was redesigned with a finer entry and widened chines. Considering her oversized cockpit, the Cabo’s interior is surprisingly spacious. The mid-galley layout includes an 8-foot settee with hidden rod storage in the salon and an island berth in the stateroom, while the galley-down floorplan has a stall shower in the head. Additional features include in-deck fish boxes, transom door and gate, good cabin headroom, and wide side decks with sturdy rails. Twin 375hp Cats cruise in the mid 20s (about 30 knots top). Later models with 450hp 3116 Cats cruise at 28 knots (30+ top).

Gold-plated convertible is widely considered among the best small flybridge boats on the market.