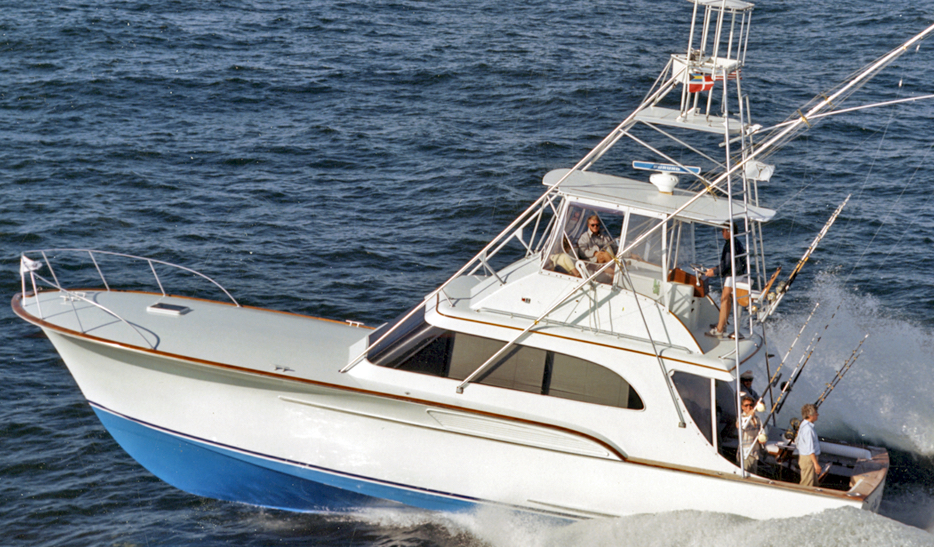 Name: 47 Convertible
Length: 47'0"
Hull Type: Modified-V
Gross Weight: --
Fuel Capacity: 750/840 gals.
Model Years: 1986—1991
Draft: 4'0"
Beam: 16'0"
Water Capacity: 150 gals.
Waste Capacity: 50 gals.
Length w/ Pulpit: --
With her flared bow and classic Carolina styling, the Buddy Davis 47 raised the bar for midsize sportfishing yachts in the late 1980s. Indeed, for many anglers the Davis 47 was the gold standard against which other convertibles her size were measured. It wasn’t just the sweet styling that earned so much praise; the soft ride of Buddy Davis hulls made believers out of more than a few skeptics. (Note that the first six hulls were fully cored; after that, only the hull sides were cored.) Several floorplans were offered in the 47, mostly two-stateroom affairs with the galley down although a three-stateroom layout—rare for a boat this size—was available late in her production run. Davis interiors of this period are comfortable and well finished but not what anyone would call lavish. Key to the 47’s success, of course, is a large fishing cockpit with two in-deck fish boxes, livewell, tackle center with sink, and direct engine room access. Note the unusual flybridge layout with its teak helm console (with aluminum wheel and single-lever controls) and wraparound lounge seating. Standard 735hp 8V92 Detroits cruise at 23–24 knots (high 20s top), and 820hp MANs cruise at 28 knots (30+ top). A total of 88 Davis 47s were built.