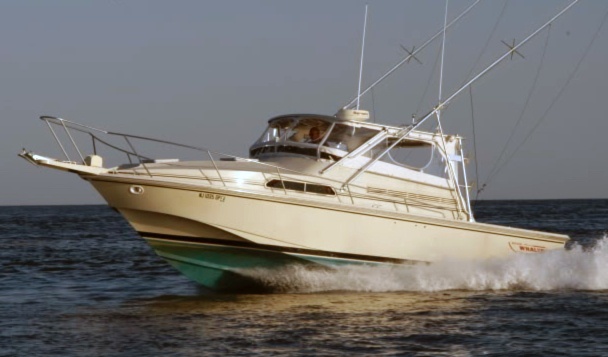 Name: 31 Sportfisherman
Length: 31'9"
Hull Type: Modified-V
Gross Weight: --
Fuel Capacity: 313 gals.
Model Years: 1988—1991
Draft: 2'8"
Beam: 11'10"
Water Capacity: 40 gals.
Waste Capacity: 15 gals.
Length w/ Pulpit: --
When she was introduced in 1988 the Boston Whaler 31 was a departure from the company’s history of building outboard-powered center console and walkaround designs. This was the biggest Whaler yet, and like all Boston Whaler products, her foam-filled hull provides enough flotation to keep her afloat even when swamped. On deck, the 31 differed little from other serious fishing boats of her size and vintage. The helm and companion seats are mounted atop tackle locker pedestals on the bridge deck, and there’s enough room in the big cockpit for the installation of a large fighting chair. For access to the engines, the entire bridge deck can be raised on hydraulic rams at the push of a button. Note that the 31 was updated in 1991 when the cockpit and the interior were redesigned. Fishing amenities include a transom door, two removable fish boxes in the cockpit sole, a bait prep station, and plenty of rod storage. On the downside, the side decks are very narrow. Most early 31s were powered with a pair of 250hp Cummins diesels (22 knots cruise/mid 20s top). Later models with 300hp Cummins cruise at 24–25 knots.

Cockpit and interior were redesigned in 1991. Bridge lifts electrically for engine access.