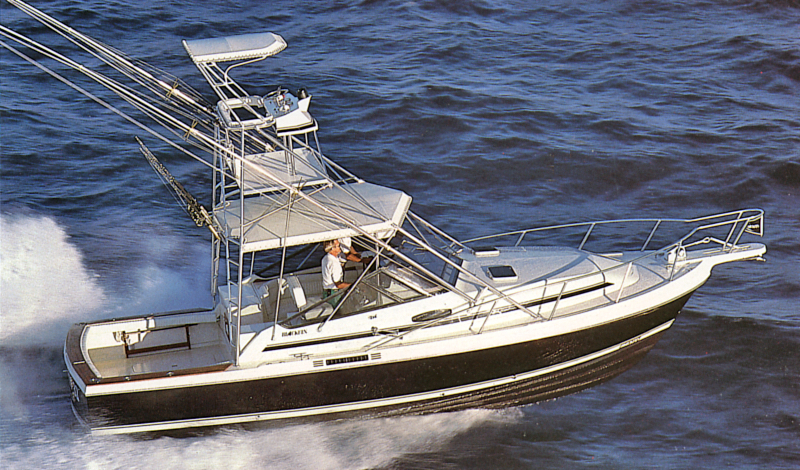 Name: 32 Combi
Length: 32'0"
Hull Type: Deep-V
Gross Weight: --
Fuel Capacity: 304 gals.
Model Years: 1988—1992
Draft: 2'8"
Beam: 11'11"
Water Capacity: 50 gals.
Waste Capacity: 15 gals.
Length w/ Pulpit: --
Blackfin’s marketing people once dubbed the 32 Combi the “911 Turbo of sportfishing boats”—a fair description for what many anglers still regard as one of the premium day boats of her era. She was built using the proven deep-V hull of the Blackfin 32 Sportfisherman with a wide beam, plenty of flare at the bow, and a sharp 21 degrees of transom deadrise. Like other Combi models, the 32 is a beamy, low-profile fishing machine that almost begs for a tower. Blackfins were never inexpensive and they were aimed at the upscale end of the market. While the 32 Combi is obviously designed for fishing, her cabin accommodations are surprisingly plush. Indeed, with berths for four and lounge seating opposite the helm on the bridge deck, she can easily double as a weekend cruiser. A transom door was standard, and the cockpit can handle a full-size chair. Additional features include a pair of in-deck storage boxes, an integral bow pulpit, and relatively wide side decks. Standard 320hp Crusader gas engines cruise the Blackfin 32 Combi at 24 knots (31+ top), and optional 300hp Cat 3116 diesels cruise economically at around 26 knots and reach 29–30 knots wide open.

Hard-hitting express with sleek profile is still regarded among the best open sportfishermen of her era.

Sportscar-like handling led one observer to call the Combi the “Porsche 911 of fishing boats.”