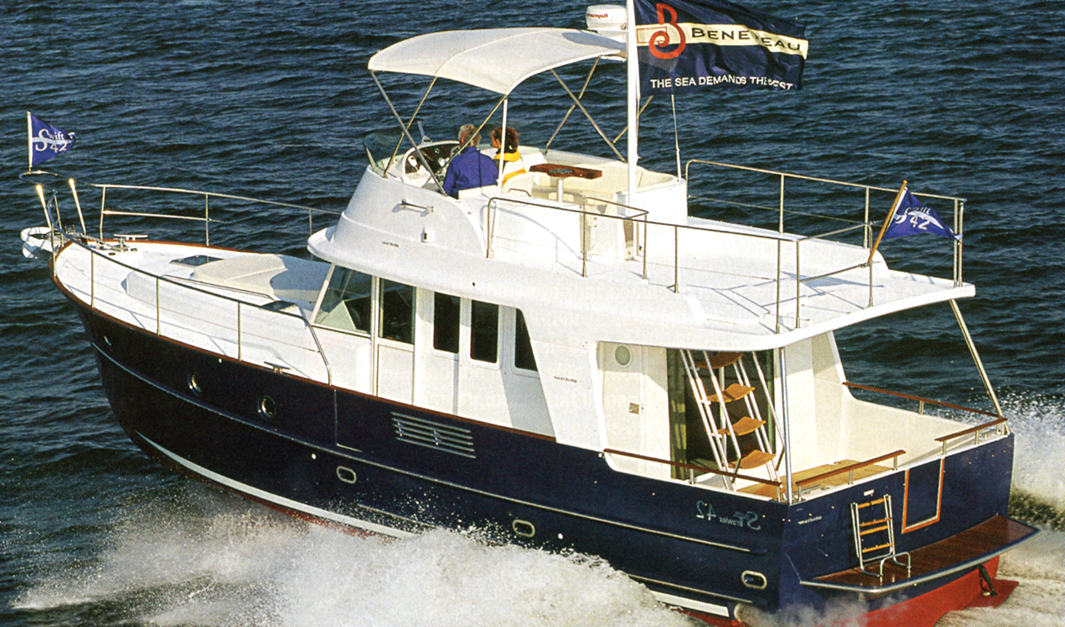 Name: Swift Trawler 42
Length: 42
Hull Type: Semi-Disp.
Gross Weight: --
Fuel Capacity: 395 gals.
Model Years: 2004—2009
Draft: 3'5"
Beam: 13'11"
Water Capacity: 169 gals.
Waste Capacity: 24 gals.
Length w/ Pulpit: --
First of the Beneteau Swift Trawler series, the ST 42 was notable for her distinctive styling and a simple, no-nonsense approach to construction. She was the first of several powerboat models Beneteau has introduced into the U.S. market in recent years. A trawler in appearance only, the 42 is built on a semi-displacement hull ended up selling over 400 capable of cruising speeds well beyond those of traditional trawlers. Below decks, her appealing two-stateroom interior features a well-appointed salon with mahogany joinery, compact galley with deck access door, and a lower helm with double-wide seat. An island queen berth is in the master stateroom while the guest stateroom is fitted with a large double berth. Note that galley storage is inconveniently located along the port side of the salon. Topside, flybridge overhangs shade both side decks as well as the entire cockpit. Wing doors—unique in any trawler design—close off the cockpit from wind and spray. The wide side decks are a plus. Additional features include a cockpit storage lazarette, spacious engine room, centerline transom door, and a nifty entry gate in the starboard bulwark. Cruise at 20 knots with twin Yanmar 370hp diesels mid 20s top).