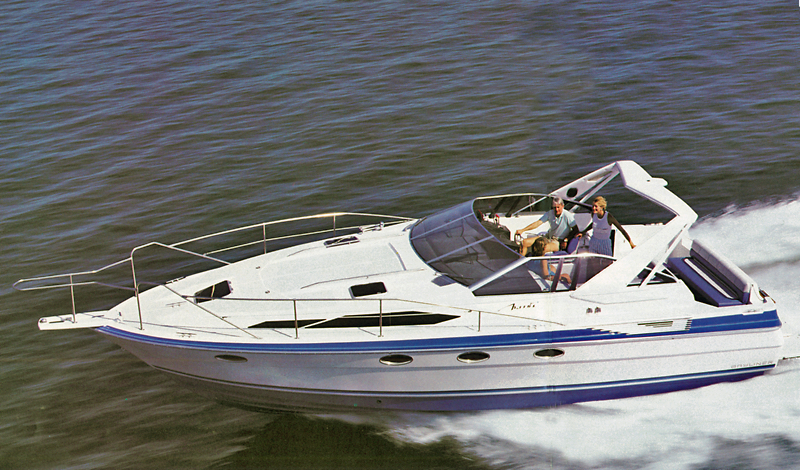 Name: 3450-3485-3785 Sunbridge
Length: 34
Hull Type: Modified-V
Gross Weight: --
Fuel Capacity: 205 gals.
Model Years: 1987—1990
Draft: 3'0"
Beam: 12'10"
Water Capacity: 50 gals.
Waste Capacity: 34 gals.
Length w/ Pulpit: 36'7"
Bayliner’s marketing people had a field day with this late-1990s sportcruiser, giving her three different names in the four years she was in production. She was introduced as the 3450 Avanti Sunbridge in 1987; for 1988–99 she was called the 3485; and in 1990 (when she gained a new integrated swim platform) she was known as the 3785. While she might have been considered “racy” in the late 1990s with her bold graphics, raked arch and Med-style bow rail, by today’s standards the 3450/3485/3785 is downright garish with little to recommend her other than a low price and a big interior. Built on a beamy modified-V hull, the midcabin floorplan is arranged with a U-shaped galley opposite the galley in the salon. A privacy door separates the forward stateroom from the salon—definitely a plus—and there’s enough room in the aft stateroom for two adults. The 1980s decor is cheap and poorly finished. On deck, a settee opposite the helm provides guest seating, and additional bench seating is built into the transom. Hatches in the aft cockpit floor provide good access to the engines and V-drive units. Standard 330hp gas engines cruise the Avanti around 20 knots with a top speed of 27–28 knots.