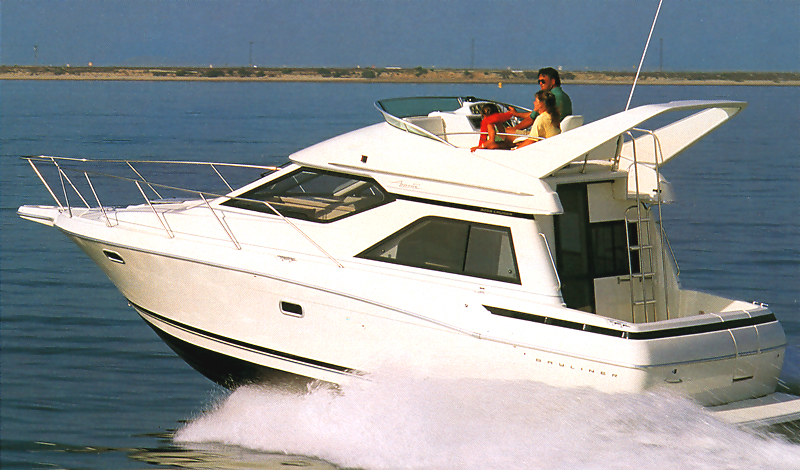 Name: 3258 Command Bridge
Length: 32
Hull Type: Modified-V
Gross Weight: --
Fuel Capacity: 180 gals.
Model Years: 1995—2000
Draft: --
Beam: 11'0"
Water Capacity: 52 gals.
Waste Capacity: --
Length w/ Pulpit: --
With her rakish lines and aggressive profile, the 3258 Command Bridge was an attractive choice for late 1990s Bayliner buyers looking for a midsize flybridge boat at an affordable price. Like all Bayliner models of her era, she was built on a lightweight, solid fiberglass hull with moderate beam and transom deadrise. The cabin window treatment is very Eurostyle—easily her most distinctive feature—and the small cockpit virtually guarantees an exceptionally roomy interior layout. The 3258’s salon is split into two distinct areas. The forward section is a step up from the salon sole with a small settee opposite the helm. In the aft section of the salon, a U-shaped dinette faces the in-line galley with its generous counter space. The entrance to the aft cabin is forward, beneath the windshield, and the head (which has a separate stall shower) is under the lower helm console. Given the expansive interior dimensions, it’s no surprise that the cockpit of the 3258 is small. Note too that the side decks are practically nonexistent. A radar arch, bow pulpit, and a transom door were standard. Twin 250hp MerCruiser I/Os cruise at 20–22 knots (high 20s top), and 310hp Mercs cruise at 25 knots (mid 30s top).