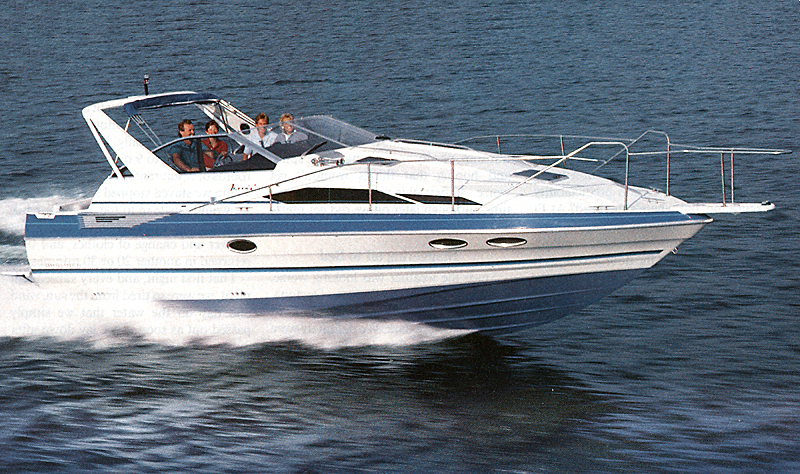 Name: 3250-3255-3555 Sunbridge
Length: 34'7"
Hull Type: Modified-V
Gross Weight: --
Fuel Capacity: 205 gals.
Model Years: 1988—1994
Draft: --
Beam: 11'5"
Water Capacity: 50 gals.
Waste Capacity: 34 gals.
Length w/ Pulpit: --
Because they changed their model designations so often, it used to be very confusing to follow any Bayliner product that stayed in production for more than a few years. Here’s the story of this boat: introduced in 1988 as the 3250 Avanti Sunbridge (with a 31-foot, 6-inch LOA), the name was changed to 3255 Avanti Sunbridge in 1989. She became the 3555 Avanti Sunbridge in 1990 when a new integral swim platform added some length (and eye appeal) to her lines, and in 1993 the “Avanti” designation was dropped. This was a popular model for Bayliner during her production years, and aside from some minor decor updates from year to year, her floorplan remained essentially unchanged from the original. A convertible U-shaped dinette is opposite the galley in the salon, and it’s notable that the forward stateroom is fitted with a privacy door rather than just a curtain. As midcabin layouts go, the 3555 isn’t as cramped as most and ventilation—two opening ports and an escape hatch—is very good. On deck, there’s guest seating opposite the helm, and a pair of hatches in the cockpit sole provide good access to the motors. Among several engine options, twin 250hp MerCruiser I/Os cruise at 20+ knots (28–29 top).