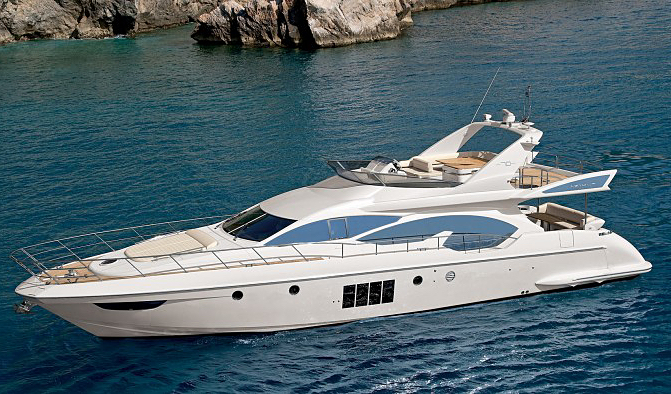 Name: 64 Flybridge
Length: 66'11"
Hull Type: Modified-V
Gross Weight: --
Fuel Capacity: 1,030 gals.
Model Years: 2011—2019
Draft: 4'11"
Beam: 17'2"
Water Capacity: 258 gals.
Waste Capacity: 92 gals.
Length w/ Pulpit: --
Successor to the top-selling Azimut 62 Flybridge, the Azimut 64 Flybridge took Italian styling and luxury to the next level when she was introduced in 2011. The flybridge and cockpit are among the largest in this class, and the squarish bow protects the deck and sun pad from sea-spray while cruising. On the main deck, the salon is flooded with natural light through large windows. A posh U-shaped sofa to port in the salon seats six, and a long cabinet to starboard houses an entertainment center. Two steps separate the salon from the galley and dining areas. Unlike earlier Azimut yachts, the galley is completely open to the dinette and salon. The helm has been moved from a central position to starboard which permits an atrium on the port side while also allowing more light down into the living area. There are three staterooms and three heads below. The full-beam master is amidships and features an offset queen bed, two-seat dinette, and panoramic views from port and starboard hull windows. The VIP stateroom has an island bed, and the second guest stateroom has two single beds convertible to a queen. Two-person crew quarters are aft. Caterpillar 1150hp C18 diesels cruise at 26–28 knots (30+ knots top).