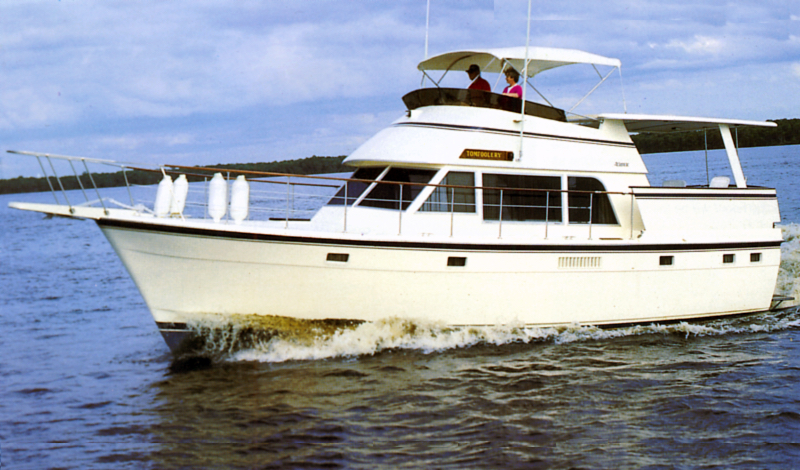 Name: 44 Motor Yacht
Length: 44
Hull Type: Modified-V
Gross Weight: --
Fuel Capacity: --
Model Years: 1977—1992
Draft: 3'5"
Beam: 14'0"
Water Capacity: 240 gals.
Waste Capacity: --
Length w/ Pulpit: --
The Atlantic 44 Motor Yacht is a traditional Hargrave-designed long-range cruising yacht whose classic styling will probably never be out of date. A popular model, she remained in production for fifteen years without major alterations to her appearance—a long and successful production run by any standard. Heavily built on a solid fiberglass modified-V hull with moderate beam, several two-stateroom floorplans were offered in the Atlantic 44 over the years. The latest versions had the galley and dinette down a few steps from the salon with a choice of lower helm or entertainment center. Atlantic was well known for their quality interiors, and the teak (or mahogany) woodwork found in the 44 MY is very well crafted indeed. A hardtop was optional, and early models came with a fold-down mast and boom. Designed with long-range cruising in mind, the Atlantic 44 was offered with a variety of twin-diesel installations from trawler-speed 135hp Lehmans up to the more powerful 375hp Cats. At her 8-knot hull speed, she’ll cruise economically for 800–900 miles (with optional fuel). Planing speeds of 18–19 knots are possible with the 375hp Cat diesels.

Early models came with mast and boom assembly. Most were sold with optional hardtop. Above-average fit and finish throughout.

Planing speeds of 18-19 knots are possible with Caterpillar 300 diesels.